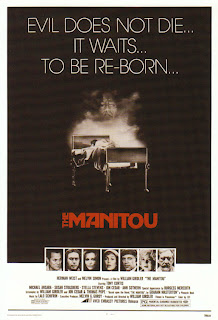 I have seen a lot of "Exorcist" rip-offs in my day but none-quite like this. Films like "The Antichrist" and "Beyond the Door" tried desperately to outdo the film that 'inspired' them by being more shocking, vulgar and nasty minus the classy filmmaking. "The Manitou", a home-grown American rip-off lacks both the vulgar nastiness and the classy filmmaking but still manages to be highly entertaining in the high camp department. So how can a bad "Exorcist" rip-off be entertaining by lacking all these essential ingredients? Well check out the film description below to find out why...

A woman arrives at a hospital with a large bump growing on the back of their neck. The doctors and tumor experts are dumbfounded so she finds solace in her old romance Tony Curtis, who just happens to be a hack fortune teller. The 'tumor' grows at an incredible rate and the interior starts to resemble a fetus. Yes, you read right, a fetus. When doctors attempt to remove the growth, all hell breaks loose with doctors cutting themselves with scalpels and lasers going bonkers. Curtis knows something is amiss so he gets some of his psychic friends to hold a séance and finds that a four century old dead Native American medicine man has impregnated himself in the neck of his old flame. I'm shitting myself with laughter just typing this! Somehow Curtis convinces the doctors of this fact and the hospital agrees to pay a Native American medicine man $100,000 to come in and 'exorcise' the Native American demon. This exorcism is hands down the most trippy, bizarre, and unintentionally funny exorcism ever to be displayed on film.

What I don't get is how the filmmakers convinced well liked and respectable actors like Tony Curtis and Burgess Meredith to appear in such comical crap. I really don't know how Tony Curtis didn't burst out into laughter (I have a feeling if any outtakes emerge he would be) over the embarrassing nature of the film. Burgess to top it off is completely wasted in his worthless role that literally gives our characters NO advice, basically "you're shit out of luck."

Despite it's hilarious plot, the film does have a rather good look to it thanks to director William Girdler. Despite being an independent film the film looks like it has a fairly high budget with great sets and good special effects for the time (modern viewers will find them dated).

As you can't tell from reading the review the main problem is the ridiculous plot. Nothing against Native American beliefs but when horror films start bringing in Native American mythology into the mix they usually turn out like crap. The most hilarious aspect of this plot (and believe me there are many) is that our Native American exorcist tells Curtis that every object, even man-made, has a Manitou and they attempt to defeat the demonic medicine man (in the form of a heavily make-upped midget) by channeling all of the hospital computer's Manitous to destroy him. It's enough to make your gut ache with laughter!

"The Manitou" is a high camp classic that was originally made to be a seriously taken "Exorcist" rip-off. The great cast, absurd plot and unintentional laughs will make this a must see for fans of the ludicrous side of horror films. Alcohol is highly encouraged to be consumed throughout the picture for the best effect.