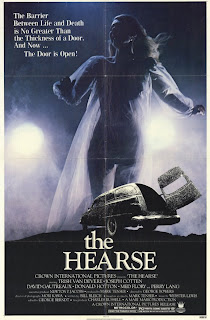 That lyric of a child song always gave me chills. It's so damn creepy! There is something unnerving about hearses as they are a symbol tied to death and sadness. This unnerving nature about the vehicle makes them an obvious symbol of 'horror' but is the perceived nature of this vehicle enough to be the basis of a good horror movie? That would be asking too much wouldn't it?!

Trish Van Devere plays a women on the verge of a nervous breakdown. Her mother died and her husband left her so she decides to get some fresh air by moving into her dead aunts house that was willed to her from her mother. Everyone in town treats here like shit due to the fact that the house she has inherited has the reputation for being a haunted. In reality her aunt and lover were devil worshipers and her aunts lover has come back from the grave and aided by a ghostly hearse plans to take a new bride. Is Devere really being haunted by the dead or is she just going slightly mad?

"The Hearse" bombed at the box office in 1980 and many claim it to be for the fact the film goes for ghostly chills and atmosphere as opposed to flowing blood like the slashers that were flooding cinema's with gore at the time. Sure this could have hurt the film but the most important ingredient that aided in "The Hearse" failure at the box office is that this simply isn't a good movie. When it comes right down to it when your film just plain and simple isn't GOOD, it will more than likely not do well and "The Hearse" fits this equation perfectly.

Trish Van Devere is strong as our likable lead but the rest of the cast is terrible. Any chills built up with the creepy atmosphere deflates instantly when anyone other characters open their mouths. The film also suffers from numerous plot holes and an ending that absolutely pisses you off. Talk about loose ends that are never tied up!

If you want a horror film with no gore and tons of creepy atmosphere done right then go see "The Changeling" as "The Hearse" will fail to chill you to the bone. Director George Bowers is able to craft some creepy moments but the bad acting, poor flow and uninvolving plot just fail to drag the viewer in. Mix all this with a dud of an ending and your destined to have another lackluster horror film to gather dust on your DVD shelf.