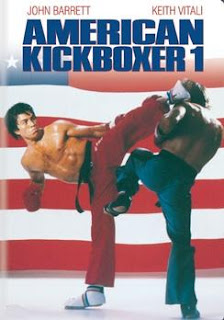 The biggest joke that comes out and slaps right in the face is the title of this damn movie. Really what filmmaker ends their title with the number "1". First I thought it was just the box title as the distribution company, like my friends at Full Moon Entertainment, might have re-released the film on the home video market and decided to reinforce to audiences that this was the FIRST entry of a series of films by adding a "1" to the box title. No, it's not just the box title as the title card on the damn film itself reads "American Kickboxer 1". Seriously what the fuck?! Did they really think people were that idiotic to perhaps think this was another sequel to the Jean Claude Van Damme vehicle "Kickboxer?" It's safe to assume that if there isn't a number after the title or a subtitle that this isn't a sequel. So they added it to help the inept brainless movie going public know this wasn't a sequel or it was an arrogant assumption that it would be a big enough it to warrant a sequel... god help us.

What we get here is a film about kickboxing... that's a stretch. And am American Kickboxer no less... as if you couldn't guess. Our American kickboxer is portrayed by John Barrett, a real-life middle weight kickboxing champion and ex-fighting partner of Chuck Norris and of course his character is a middle weight kickboxing champion. When a young arrogant rising athlete threatens his girlfriend at a corporate party, he decides to defend her honor and begins a fight with the brute. In the process he hits an innocent bystander who tried to break up the fight, accidentally killing him. He heads to prison for a year, gets released and being banned from championship fighting he decides to be a trainer. In the midst of having a midlife crisis he decides to take a challenge by the young arrogant ass who took over his title while he was behind bars.

When I go into a Kickboxing film, I expect low rent trashy entertainment and despite the promising title, "American Kickboxer 1" falls harder than being round house kicked in the jaw. The problem is that it focuses on plot and not on action. Focus on plot... wouldn't that be an ingredient for a better film? It would if it weren't so ineptly made. Instead of providing an entertaining B-action film, the filmmakers opt to make a more drama oriented borefest with bad acting, a sluggish pace, and every sports cliché in the book. Will Barrett's life fall apart? CHECK. Will his relationship with his woman become rocky? CHECK. Will he gain self confidence by training? CHECK. Will we suffer through lame montages? DOUBLE CHECK (accompanied with mega lame pop ballads). Will he eventually triumph over his advisory? I don't want to give anything away but you've seen enough "Rocky" films and Kickboxing films by this time to figure it out.

What we got here is an ultra lame kickboxing film that tries to mimic "Rocky" elements and in the long run lacks kickboxing action. Fans looking for a trashy B-Action fest will be sorely disappointed by this tedious effort. These fans are better off skipping this and going to the obligatory "American Kickboxer 2." Like you didn't know a sequel was going to follow! Actually two separate sequels would follow, the other being "To the Death." More on that conundrum in later reviews...