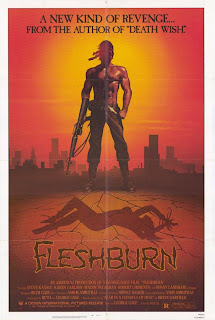 The main reason I wanted to see this picture is for the fact that it stars Sonny Landham as the psychotic villain. Don't recognize the name? Well do you remember the bad motherfucker from "Predator" who was the tough ass native American tracker? Yes the guy who cut his chest with the machete before taking the Predator mono-e-mono. Yeah this guy is B-A-D-A-S-S. He even had the balls to have a security guard hired for him on the set of Predator not to protect Landham from people, but to protect people from Landham. Yeah, B-A-D-A-S-S. I also wanted to see it for the fact it was based on the novel by Brian Garfield, the same guy that gave us "Death Wish" and "Death Sentence." Landham playing a psychotic Vietnam vet villain in a film based on the author of "Death Wish", bring on the popcorn bitches!

The film opens with an odd written backstory of how a Native American Vietnam Vet left four people to die in the middle of the desert due to a disagreement over opinions on Native American magic. Four psychologists found him to be mentally ill so he is sentenced to life in a mental health ward. Is any prison strong enough to hold Landham. Fuck no and he easily breaks out. He soon gets a vehicle and weapons and heads around the state kidnapping the psychologists and leaving them all in the middle of the desert to die while he keeps a watchful eye on them.

The problem with this film is it doesn't live up to its potential and comes out looking more like a made-for-tv would-be thriller. It just degrades to a boring survival film with Landham wasted as the mad vet only appearing at the beginning and end, disappearing throughout most of the middle of the film. The acting is decent but the characters are blah and the ending is FAR from satisfactory. Looking for a violent mad brawl between the psychologists and Landham? Well you won't find anything exciting here.

The poster artwork was promising making this look like a variation on the Rambo theme which it is far from. This film had so much potential to be a taunt survival film with a strong casting choice for the Vet but thanks to boring filmmaking and blah script, we are left with a hollow shell of what could have been. Sonny Landham is sadly underused... yet again!