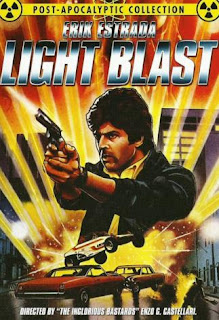 After directing a number of post-apocalyptic and dystopian future films, Italian action director extraordinaire Enzo G. Castellari decided to return back to the Poliziotteschi crime genre, the genre he helped to create in the early 70s with such classics as "High Crime", "Street Law" and "The Big Racket." Even returning to a genre the he was a master in, "Light Blast" still succumbs to many flaws that plagued Italian films of the 80s, most notably a feeble story and limp characters.

The plot to "Light Blast" injects a little science fiction as a mad physicist is running around terrorizing San Francisco, melting structures and people with a cheesy looking contraption. He demands $10 million or he will kill and destroy more people and structures. Homicide cop (Erik Estrada) is on the case and uses any means necessary to bring the psychopath down.

Our star choice is a little perplexing. I mean of all people they had to pick Erik Estrada? I understand Italians like to use popular American actors in order to sell the movies to foreign distributors but he just seems miscast in an Italian action film. I have never been a fan of Estrada and this despisement of him was injected into me at an early age from my father and it surrounds my namesake. We have a lot of Norwegian ancestry in my family lineage so I was originally going to be named Erik after the Viking Erik the Red. My father had the spelling of my name changed to Eric with a "c" so it would not resemble the first name of our hero Erik Estrada. Yes that's how much he was hated in our family! Despite being miscast he actually wasn't horrible in the film but some of his dialogue was cringe worthy. It did send a shiver down my spine when his character was introduced by being only clad in a black Speedo to meet some terrorists demands. AHHHH!

Enzo continues his pseudo documentary style of filmmaking that became more prominent in his 80s offerings which has a nice gritty feel with some lively camera angles. As expected there are some amazing action sequences with some dangerous stunts complete with lots of slow motion head shots. The action is plentiful but the numerous chase sequences seem only divert the lackluster story when the plot begins to drag. The plot also has far too many "convenient" set-ups that will have the viewer going "what are the chances!". An example of this is Estrada notices a scrape on the back of one of the terrorists vans and later sees a scrap on a generator through a window in a garage. What are the chances!

I will be honest I did have fun with "Light Blast" as an empty-headed action film. I mean how can a film with a laser that melts people, a climatic chase in a race car and a score by a duo named Oliver Onions not be fun? Fans of Italian cult films will definitely want to pick this up but this is still a far cry from Enzo's superior 60s and 70s cinema outings.

Note: The DVD release from Code RED (one of my favorite companies) strangely put the banner "Post-Apocalyptic Collection" at the top of the DVD cover, a collection of DVDs which also contains "2019: After the Fall of New York", "1990: The Bronx Warriors", "The New Barbarians" and "Exterminators of the Year 3000." Don not be fooled as there is NOTHING post-apocalyptic about this film.