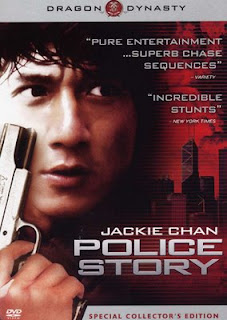 Although Jackie Chan has always been a man able to create some of the greatest stunt fights alive (with himself), going back to his earlier films is somewhat of an awe inspiring experience. Back before he was just the comedian first and the watered down goof he is in his American films, he had a more than stellar filmography. Which of course is highlighted by the original "Police Story". With a well crafted and simple police drama as its foundation, Chan's ability to charm as a lead, and some of the best action sequences ever to grace film, "Police Story" is easily one of the highlights of his career.

Ka Kui (Chan) is a top notch officer on the rise. His ability to improvise on the job has garnered him a lot of attention from his higher ups. When he is able to catch a crime lord after an operation is botched, he is on top of the world. Assigned to protect the witness against this crime lord, he suddenly finds himself the target of betrayal and focus of a frame up. Using his unique physical prowess and determination, Ka Kui must take back a life that is quickly slipping away.

Although the film is not perfect in many ways (Chan's directing can be a little too over the top to really embrace the plot as it could have), "Police Story" is an engaging and thrilling watch. Proving that he does indeed have some acting talent, Chan is on top of his game in the film. We empathize for his character as his world crumbles and we root for him the entire time whether its through the intense action pieces or the comedic bits where he scrambles to not screw up too much. He is obviously the highlight of the film in all his charismatic ways and makes "Police Story" work the way it should.

Although Chan's style has always been a mixture of seriousness and comedy, the balance seems to be at some of its best here. The comedic bits, particularly with his girlfriend May (Cheung), are well paced in the overall plot and make for some pretty fun sequences. Watching him juggle through various phone conversations all at once can only bring a smile to the audience's face. Of course, this is balanced out with his more serious plot that always leads to a wild action sequence. Although the action sequences here are still fairly over the top, "Police Story" makes them all seem (at the time) very realistic as Chan battles off hordes of men in some great settings. The highlight of course being the final show down in a mall where he is only given plenty of opportunities to throw baddies (and be thrown by baddies) through glass and various items.

If you are looking to expand your Chan collection past the "Rush Hour" films, then a great starting point is "Police Story". It's a great balance of his serious work and his all too common action/comedy pieces that made him a world wide star. It's not a perfect film, but its still one of the ones that I find myself watching the most from his catalog.

BONUS RANT: I do hate how randomly this film ends. Blurred shot in the middle of set piece. What?! No aftermath? Granted, Asian cinema (particularly of the Hong Kong variety) has had films end this way for decades, but this film seemingly rises above that sort of deal.

Written By Matt Reifschneider
Posted by DarkReif at 3:43 PM