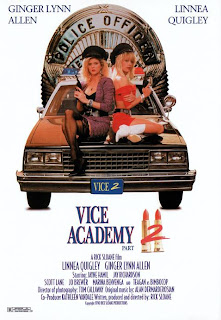 Well I won't lie, "Vice Academy Part 2" was exactly like I expected it to be: A lame sequel to a lame film that is a rip-off of the slightly less lame "Police Academy" franchise. It's basically an exact carbon copy of the first film and why not as that was what fans wanted and that is exactly what writer / director /producer / editor Rick Sloane provided. Since I wasn't a fan of the original it should come as no surprise that I'm not a fan of this sequel either... to put it lightly.

One thing that makes this film a little more watchable is it contains a little more female skin which is a happy diversion to the forced comedy, lame acting, artless directing and overall cheap production values. Director Sloane tried to liven up the film by introducing... get this... BimboCop. BimboCop is a "RoboCop" in the form of a woman body builder who might be replacing our sleazy and inept vice cops from their jobs. Not surprisingly this "novel" idea falls flat.

If by some chance you loved the first "Vice Academy" then by all means dive into this sequel. One-track minded men with a liking for dumb women and juvenile comedy will dig it. Good news.... "Vice Academy Part 2" was a huge hit on video so "Vice Academy Part 3" got made less than a year later. God help us!