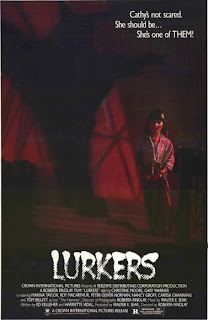 I read the film description on the back of the DVD set that I obtained this film in and thought it sounded interesting. If you've read my reviews for "Tenemant" and "Prime Evil" then you can imagine my horror when I saw the name Roberta Findlay appear in the opening credits as director. Her name is like an awful omen that you're going into an absolute piece of shit. Roberta may not be as bad as Fred Olen Ray or Uwi Boll but damn is she not a runner up as she has the uncanny ability to turn a gold bare into a log of brown trout.

We open with a young girl who is about strangled to death with a jump rope outside her apartment building and that night she starts seeing ghostly images of deformed old people known as "Lurkers." Fast forward to years later and as a grown women her fianceé decides to take her to his companies party which just happens to be in the very building she had problems with the Lurkers. Her fiancée is a real douche bag by cheating on her behind her back so obviously his other plans for his 'love of his life.'

I will give the film a little praise in that Findlay was able to create a somewhat surreal atmosphere once our lead re-enters the haunted apartment building. My favorite sequence has to be when she is waiting outside when out of nowhere a psychopath emerges chasing a girl with a sledge hammer. It generates a response of 'what the fuck was that'. Sadly these surreal sequences are detrimented by a silly, laugh inducing shit score.

The surreal sequences are enough to make this the 'best' Roberta Findlay film I have seen but that's like saying a log of shit with corn is better than a log of shit with peanuts. Even if it's better, it's still shit. The plot is overall uninteresting, the acting makes the flow tedious and the plot holes are enough to make one bash their head against the TV. Only watch if you're a masochist, as any film by Findlay is guaranteed to gratify you the pain your craving.