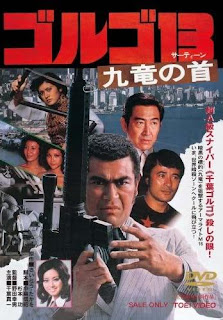 While watching "Golgo 13" I kept asking myself why I never hunted down more Sonny Chiba films before. Sure I heard about his "Street Fighter" series and even saw Chiba in films prior to this but he was always in a small bit part. Now finally getting my hands on a Chiba box set that actually has films where his is the main star I can see why this guy has such a huge following. This guy is B.A.D.A.S.S. He defines the word "badassary" and he might even become one of my top 3 action stars if more of his films are as badass as "Golgo 13".

So what is Golgo 13 stand for? Well it is the code name for Sonny Chiba who is the world's best hit man and the Golgo portion stands for Golgotha, the mountain Christ was crucified on, and the 13 is the number of the disciple that put the crown of thorns upon his head. Any assassin who has a code name with that deep of meaning is a guy you don't want to mess with! Golgo is so good at his job that he only meets with his hirer once, unless of course something goes wrong with the mission. He also is a supreme marksman and as the interesting quirk of never shaking hands.

Golgo gets hired to kill a drug lord in Hong Kong and while on his mission the Hong Kong police force are on his trail. A hard ass cop tails Golgo to Tokyo to try to capture him before he carries out his next mission.

Sonny Chiba is perfectly cast as our cold, ruthless and calculating assassin and this guy may be an even more menacing assassin than Charles Bronson in "The Mechanic" and coming from a Charles Bronson fan that comes as a grand praise. Chiba just has such an intense face with his menacing eyebrows make it look like this guy could break your neck or tear your throat out at any moment. Not only is he menacing to look at he also brings a perfect physicality to the character in the films great action sequences, my favorite being him descending on a crane, throwing a spear in mid drop to impale a guy shooting at him. This guy is truly great at his job!

The plot can be a little hard to follow at times, especially in its original Japanese language format but the dubbing in the English language version isn't great, hindering the films hard edged power. The dubbed version also includes a rather poor narration at the end to make it clear to the audience how Golgo outsmarted the cops and managed to complete his mission.

Golgo 13 was based on the popular Japanese Manga comic book series and this is actually the second film adaption of the character (the first version was made in 1973). Though I have not seen that film or any of the animated films made later, it's hard to imagine they are any better than this. The ending is left open for a sequel but sadly one never got made bringing a tear to my eye that it never materialized into a franchise.

"Golgo 13" (released in America as Golgo 13: Kowloon Assignment) is a violent badass assassin film that is a must for action film fans craving good action films that are out-side American Hollywood mold. Chiba is extremely badass and has a charm to him making Golgo 13 perhaps the best hitman to ever grace the screen. It's arguable of course but Golgo 13 is tops on my list for best film assassin. I can only imagine what future action director John Woo would have been able to craft with Sonny Chiba while this intense actor was in his prime.