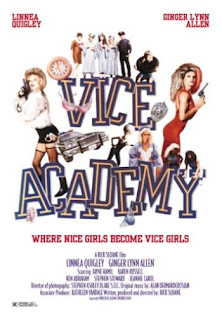 As you can tell from the title and even the font lettering that this is rip-off of "Police Academy"... a low grade rip-off. A REALLY low grade rip-off. Basically take the dumb comedy elements and basic plot of "Police Academy" and mix it with the piss poor production values and bare skin found in the long running "Witchcraft" series and you have this bastard creation and ended up spawning almost as many sequels as the very franchise it was ripping off.

The quality of this production is as low as it gets and it looks like it was made for $2.50. Along with this extremely low budget we get low grade acting to match with some pain inducing dialogue and uninspired directing provided writer/director/producer Rick Sloan. What should you expect from the guy who brought us the unwatchable "Gremlins" rip-off "Hobgoblins"?

"Vice Academy" was made to be a silly B-movie comedy with skin but even as a B-movie I still didn't find it to be "so bad it's good." It actually found it to be more annoying than anything and I ended up groaning in pain at the forced comical moments rather than snickering. People going into this expecting a lot of nudity are also going to be disappointed as there are a few topless scenes but most of the skin is only shown with the women parading around in skanky clothing and lingerie.

They made 6 of these damn things so there is an audience for these films but obviously I am not one of them and in turn found it quite dreadful. Most of the "Police Academy" films were lame and this is a lame rip-off of a lame series which in turn spawned its own lame franchise. I am a fan of B-movies but "Vice Academy" didn't tickle my fancy one iota. To me I just found the whole experience irritating and vexatious, along the same lines as Troma films. Sorry "Vice Academy" fans, this gets a big thumbs down from me. Perhaps some of the sequels improve upon the formula and maybe, just maybe I can force myself to sit through a few.