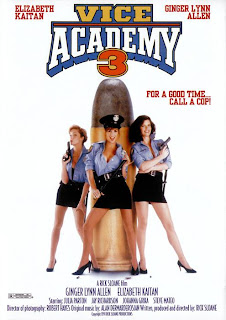 What can you say about a sequel that even Linnea Quigley refuses to appear in? That's like Michael Dudikoff turning down an "American Ninja" sequel.... oh wait, scratch that. Instead we get introduced to her character's sister (in a sequence reminiscent to "Charlie's Angels") Candy played by Elizabeth Kaitan whom you might remember from "Friday the 13th Part VII" and "Silent Night, Deadly Night Part 2." Well with screen credits like that we know she was hired for her acting talent. Ginger Lynn Allen returns so there is your one main character connection but then again does anyone get excited by the presence of Ginger Lynn Allen other than Charlie Sheen?

Well we begin with Ginger's character Holly undercover in prison but the prisoner she is supposed to be watching escapes, holds up a liquor store, gets sprayed by some chemicals and in "Batman" fashion emerges as a green-haired bitch bent on bringing chaos to the city. Now Holly and her new partner Candy must stop her!

Surprisingly I found "Vice Academy Part 3" to be a hair better than the first two. Either I'm getting used to these lame films or I'm actually getting dumber by watching them. Just remember the more you're around shit, even shit begins not to smell. What makes this sequel a hair better is the higher production values. Don't get me wrong as they are still extremely cheap but look like they cost a couple hundred bucks more. Writer/director Rick Sloane also seems to be getting a little better at writing as he even introduces a few poignant moments with multiple story lines going on. Well the film may still suck but it's at least a step in the right direction!

Another disappointing aspect of this film is Jayne Hamil doesn't return to her role of Miss Devonshire and instead get Johanna Grika filling in. Grika does an admirable job (as good as one can look in one of these films) but Hamil made the character one of the few likable aspects of the first two films. Oh did I mention Linnea Quigley doesn't return?

So far of the three films in this overlong series I have seen, "Part 3" is the best thanks to the filmmaking quality being heightened a hair. It still sucks thanks to more lame acting and forced comedy that fails YET AGAIN but then again fans of the series should be used to these aspects by now. Originally this was supposed to be the final film in the series but thanks to being another success, Part 4 was soon to follow. Also note how none of the women on the poster artwork are the actresses that actually appear in the film.... no doubt because Ginger Lynn Allen was such a bitch to work with on this film making ridiculous demands and acting like a pre-Madonna by showing up on the set hours late. Hey, this film by not be art but that is fucking lame!