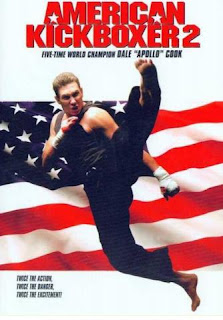 Unlike the first film which was a tournament style kickboxing movie, here we get a full fledged action film complete with gun fights, kidnappings and a love triangle. No doubt your asking is there any kickboxing. Well, not in the tournament sense, but the film does star kickboxing champion Dale "Apollo" Cook as one of our leads so yes he does use some of his trademark kickboxing moves to kick the shit of some baddies. What we get is a wealthy family whose daughter gets humorously kidnapped by a guy repelling into a swimming pool from a helicopter. Being threatened that the girl will be killed if the police are involved, the mother turns to her hot-head cop ex-husband and long-haired playboy karate instructor lover (whom she cheated with while married to her ex). The kicker is she doesn't know which one is the father of her daughter so both agree to rescue her just in case she belongs to either one of them. The result is quite hilarious as they bicker and fight the entire time while trying to put their differences aside to rescue their daughter. Yes it's "My Two Dads" action movie style!

The acting is bad, real bad but it actually enhances the enjoyment of the film. Dale Cook constantly has his jaw clenched on a tooth pick as he spouts out awful dialogue like "the only peace your are worried about is the one dangling between your legs. " Evan Lurie is equally bad but both bad actors seem to cancel each other out making the film quite enjoyable in the "so bad it's good" vibe. The action sequences are good especially for a low budget action flick shot in the Philippines and our two leads know their kickboxing and martial arts as they beat the living shit out of about everyone.

The actors and director/writer Jenö Hodi know their making a B-grade direct-to-video sequel to a hunk of shit so they run with it, having their tongues planted in their cheeks as they spout hilariously bad dialogue. To be honest I had a blast with "American Kickboxer 2" and it has become one of my all time favorite unintentional comedies. I mean how can a film with a line like "your ass is grass and we're the lawnmowers" not be somewhat entertaining? I say skip the hunk of shit known as "American Kickboxer 1" and go directly to this 'sequel'. Sure it's bad.... but in a good way.