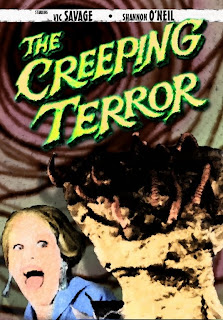 Listen up Ed Wood fans! You think "Plan 9 from Outer Space" is the worst movie ever made? Perhaps you're one who thinks "Manos, Hands of Fate" or even "Troll 2" holds that crown. Well do I have a movie for you! For my money "The Creeping Terror" is the worst film ever made. I have seen thousands of films and boy have I seen some doozies in my time but I think I nailed the film that gets the embarrassing crown of unachievment of 'Worst Film Ever Made."

This 1964 garbage heap was the brain child of director/writer/producer/editor/star Vic Savage (why is it that movies where one guy does most of the work are usually shit?) and the plot as a giant alien space slug lands on earth and slithers around eating young teenagers. That's it!

This film is as artless and gauche as movie can get and it is obviously made by a guy who has absolutely no fucking idea on how to make a movie. Story has it that Vic Savage was an escaped con-man that went to a little town and convinced the local people that he was a big shot Hollywood producer and basically got everyone to work on the film for free. Since this guy had absolutely NO idea how to make a film he basically points the camera at one location and fills the movie with long, boring, drawn-out sequences. An example is he sets up a camera at a school dance function (that oddly seems to be happening in the middle of the day) and just shows people dancing for what seems like an eternity. No direction, no editing, just point and shoot and use all the footage you can to pad the film out to feature length.

Perhaps even worse than the filmmaking 'quality' is the God damn space monster. This is the most embarrassing 'special effect' I have ever seen in a motion picture. It literally is a shag rug carpet and you can even see the sneakers of the high school students moving it around beneath!

One of the stranger aspects of the film is the narration that is oddly overlaid throughout most of the film. I have heard two stories for this. The first is that director Vic Savage lost the dialogue tracks and was forced to hire a bland narrator to tell the audience what was going on. The second is that Vic thought it was too expensive to have the 'actors' come in and dub their lines so he did the cheaper alternative by hiring a narrator. Whoever decided this approach and whatever the reason is beyond me. The narration is just bizarre and the narration reminds you of those boring 8mm education films teachers forced students to watch in school.

This is a truly awful piece of drek that I actually recommend everyone to attempt to see only once just to take witness on how NOT to make a film. The odd story behind the making of the film is FAR more interesting than the actual final product, which is actually rather hard to sit through. If you can grin and bare it than you are a true cinema fan! Either that or you have nothing better to do with your time.

UPDATE: Filmmaker Todd Wallinger is working with Emmy-winning director Pete Schuermann currently on a documentary entitled "Creep!" which chronicles the interesting behind-the-scenes story of this dreadful film. Mr. Wallinger commented on this review below and provided some really interesting facts on the making of the picture. View the teaser trailer for the documentary by clicking here. Please support these wonderful filmmakers and their hard work by either renting or buying this documentary when it becomes available!