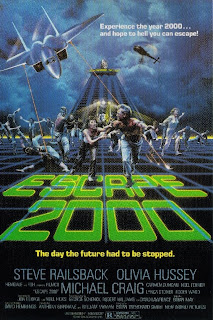 "Escape 2000" is one of the many bizarre motion pictures from the 80's I rented from my local video store as a kid. The title and cover art made this look like a futuristic "Escape from New York" clone but in actuality this is just another variation on the "Most Dangerous Game" story with a futuristic twist and plenty of Australian kookiness and schlock thrown into the mix.

After a truncated beginning with not much back-story we are introduced to a man (Steve Railsback) who is taken into custody when he broadcasts messages against the government. We are also introduced to a beautiful store clerk (Olivia Hussey) who is also taken into custody when she fights police for beating a criminal. Railsback and Hussey are transported to one of many 'rehabilitation' camps that is lead by a sadistic warden. The warden selects a small group of challenging inmates to hunt and invites a small group of this high class, aristocratic friends along for the fun but his prey end up being much more challenging than he expected.

Instead of making a serious, futuristic film about the horrors of a dehumanized society that utilizes humans for sport, director Brian Trenchard-Smith opts to go for a schlocky approach by adding in tons of exploitation elements including nudity, extreme violence and gore. He even adds a "werewolf" character into the mix (one of our hunters found him at a circus) who is introduced to the audience by tipping his top-hat. What?! It's like Trenchard-Smith is tipping his hat to the audience saying "yes, this is a schlocky film. Love it or leave it fucker!" Well I love it for his ridiculous approach.

Even with all the schlock elements, the film is actually played seriously adding to the unintentional hilarity. My favorite of these being a sequence where our "werewolf" character tears off small toe of an inmate and eats it. I mean where the fuck did that come from? All these bizarre sequences truly makes the film unpredictable and anything can happen at any moment, no matter how ridiculous or far-fetched.

The problem with this camp-fest is the weak foundations. How did the world come to be in this dystopian affair? No back-story what-so-ever is told other than stock footage of riots breaking out shown in the opening credits. The audience is offered NO EXPLANATION for the events. The rehabilitation camps also conflict with the general story about how the government wants people to be 'model' citizens. These camps are run by sick minded individuals that due heinous acts to their prisoners that are FAR worse than the laws that the prisoners broke to get there. So much for 'rehabilitation'! One can't solely blame the director for these problems as apparently the script had to be cut down to the budget and shooting schedule being slashed. The first part of the script to go of course was the opening which was to show how society declined to a "1984" style outlook.

Speaking of 'slashing', this film was HEAVILY cut of 16 minutes of footage when released in America. The film was originally made as "Turkey Shoot" in Australia, truncated by deleting all the blood and gore (you know, the good stuff) and retitling the film "Escape 2000" (despite the film taking place in 1995). The cut American release totally ruins the entertainment value of the film because cutting out these over-the-top elements leaves the audience only with a bad "Most Dangerous Game" clone. Basically a schlock film without the schlock. Thanks to Anchor Bay Entertainment the full uncut version of the film complete with the original "Turkey Shoot" (which I think far better fits the tone of the film) title card is available on DVD. This uncut version brought a whole new entertainment level to the film that I missed when I originally saw the American cut version.

"Escape 2000" isn't art but fans of a schlock entertainment with a nice ozploitation twist will have a great time. Make sure to get the Anchor Bay DVD to get the true experience as the VHS versions won't cut it.