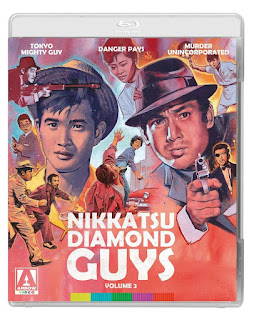 In the first Nikkatsu Diamond Guys box set that Arrow Video released in January, there was a fun little action film called The Rambling Guitarist starring Akira Kobayashi which was directed by Buichi Saito. You can read my review for it HERE. It was the weakest film of the set, but it was still a charming piece of cinema powered by fun performances and a twisty narrative. In the latest Nikkatsu Diamond Guys set from Arrow, they follow this up with another film that pairs Kobayashi and Saito together called Tokyo Mighty Guy. The reason I bring up Guitarist as a lead in for Tokyo Mighty Guy is that both films kicked off franchises and in many ways are inherently similar in tone and style. Tokyo Mighty Guy is fun, first and foremost, but it’s also a film that really gears itself towards being more heartwarming than anything else. It’s hardly a great film as it rarely delves below the surface value of the characters and story on hand, but it’s a film that earns its entertainment value through charming performances and fun comedic set pieces.

Jiro (Akira Kobayashi) has just returned from his studios in Paris and is helping out his parents to open up a French restaurant. The girl next door (Ruriko Asaoka), who helps run her parents’ bath house, has been desperate to get his attention, but his attention has been focused on helping out those in need in his community from politicians, yakuza, and corrupt business men. However, soon Jiro finds that all of the issues in his community are wrapped into one deal that he needs to stop from happening or else there is going to be some serious heartache.


I made a joke in my review for Rambling Guitarist that the first act of the film is more akin to an Elvis film than a Nikkatsu action film before it jumps on track to add in some slick yakuza side plots. Tokyo Mighty Guy is damn near 90% of an Elvis style film from the era where dramas, action, and musical elements all blended together. With its bright colors, cheesy wink-wink attitude to the audience in its silly humor, and its actual musical pieces where Kobayashi sings for the audience – including an intro song that is more or less a full on musical number – this film is all about the presentational aspect and the tone that keeps things light and fluffy even when the script goes dark. There is only so many cheesy jokes you can make when a character in your film attempts suicide or yakuza hitmen try to strong arm a politician, but Tokyo Mighty Guy certainly pushes that limit because the dark subject matter will be damned here. The audience is apt to have a good time, dammit. So prepare yourself for a film where the light tone and occasionally silly joke reign supreme. If you do, you’re likely to enjoy what Tokyo Mighty Guy has to offer in its fun, tongue-in-cheek mannerisms.


Fortunately, Tokyo Mighty Guy is powered by its charisma. The cast, fronted by the lovable asshole Jiro played with impeccable screen presence by Kobayashi, is fairly generic but certainly lovable in their own little universe. Many of the secondary characters feel a bit undercooked, including a yakuza man who drops his job as yakuza to follow in Jiro’s footsteps of being a stand-up guy or the young lady who helps run a brothel in the same neighborhood, but they are broad stroke enough to pass the time in their own trivial manner without necessarily derailing the entire tone of the film. The first half of the film is a bit too scattered for its own good and it feels like it could have used a few more rewrites to get the narrative flow down, but many of the characters and much of the small detailed information does come back around for a fun finale where Jiro and his gang decide to undermine the yakuza business deal about to happen in a local church. Granted, most of the film feels a bit like an overplayed comedy in its very shallow presentation of events, refusing to actually dig into the character interactions and social commentary its making haphazardly, but for entertainment’s sake its fun. Don’t expect more than that though.

For the first film in the latest Nikkatsu Diamond Guys package, I have to admit that Tokyo Mighty Guy is not a bad film as much as it is a very straightforward film that plays almost everything as safe as possible. While I much prefer the Saito/Kobayashi film Rambling Guitarist over this one, the film plays things light hearted enough to be a film that doesn’t offend anyone. It’s not a film that’s ultimately going to be remembered for its comedic elements and oddly placed fist fights, but for those looking for a fun film it works.