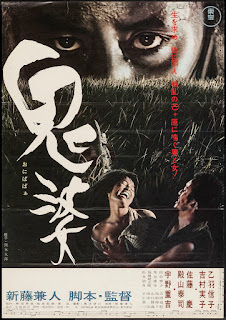 J-horror is something I've always been pretty fond of since I was a teenager; Ju-On, Ringu, the works of Kiyoshi Kurosawa, and so on have always gotten under my skin and really stuck with me in a lot of ways that horror films elsewhere haven't managed to do. I guess I can also add to that, I am not truly a horror genre fan although there is quite a bit I do like in the whole never-ending pool of cinema out there. I've been interested in checking out some of the earlier stuff, and this is very, very early ('64), and is essentially a pre-cursor to what was to come out of Japan. So does it live up to its reputation? I would say yes, although I do have a few problems, but first, the good!


A quick plot overview, for those who don't know what Onibaba is, essentially covers a mother (an old hag lady with the white streak in her hair) and her daughter in-law who live out in the middle of nowhere, in a marshy sort of area, with a little shack (home) by a river. The two hunt and kill passing samurai, men, and soldiers in general that happen to be passing by and drop them off in this creepy gigantic hole in their backyard. One day a man shows up, who knows the women, and they recognize him. To the ladies' horror, the man is the friend of the old hag's son, and thus the younger lady's husband. I won't go too much more into it than that, but things get crazier and crazier as the film go on and it's great.

First off, the lighting in this movie is fantastic. Shadows play a huge part in the film by setting the tone and atmosphere. Combine that with sharp close-ups set to some absolutely gorgeous cinematography and you have a film oozing with iconic imagery. When you see the Onibaba (demon hag) in the latter parts of the film, every single shot with the character will stick with you. I could ramble on about the visuals forever, but I won't. Those slow-motion shots of the reeds though, wow... but I digress.

The acting by the two leading ladies is worth mentioning too. The daughter in-law, played wonderfully by Jitsuko Yoshimura (Pigs & Battleships), is full of lust to the returned soldier after realizing her husband is never coming back and Nobuko Otowa, who became a Kaneto Shindo regular (and his wife), absolutely steals the show as the hag (not my choice of name) who mourns for her son. She is absolutely creepy and chilling, and the further the film progresses, the more twisted and full of hate she becomes, and it's quite brilliant.

I think my main issue with the film is in how it handles what it builds up to. Sure, the scenes have and will no doubt stick with me, but I felt the way some of the earlier parts of the climax were handled were just repetitious and hard to buy into. Without spoiling, the question that came to mind is... how many times will one run the exact same way to only find themselves being spooked by the masked demon, before they realize, oh maybe I should go a different way? The answer is, evidently they don't.

For those interested in J-horror, or those that love J-horror, you should find a lot to like here. It's not typical in the way the more modern films are done (again like Ringu, Ju-On, and so on), it's not about the scares at all. It's really slow burning, and comes through as creepy rather than scary, and it works. There were quite a few moments I know that will stick with me for years to come, and that is exactly what I expected, and loved about this film. The ending is truly fantastic, and helps further the iconic nature of this classic horror flick. One that needs to be sought out by all film lovers. Highly recommended!