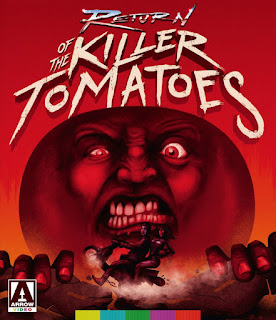 Comedy is already a very difficult genre to get “right.” It’s highly susceptible to the taste preference of its audience, it’s usually a very timely genre that’s dependent on its context, and even then it requires a kind of vision from its creative elements to execute it. This, of course, is just for a basic comedy. To make matters even more difficult is to aim for one of the fringe subgenres of comedy for your film. For example, absurdist comedies. The original Attack of the Killer Tomatoes was the kind of film that found its cult audience for being able to align all of these elements in an impressive manner for such a low budget and off beat film. However, it’s the first sequel Return of the Killer Tomatoes that really flies with the absurdity to capitalize on its bat shit insane concept. Attack laid the ground work, but it’s Return that really smashes out a home run absurdist comedy worthy of the massive cult audience that backs this silly franchise.

It has been ten years since the Great Tomato War and life is finally moving on, albeit without tomatoes. When the nephew of Finletter, Chad (Starke) and his roommate Matt (Clooney) uncover a secret lab where Professor Gangreen (Astin) is turning tomatoes into people…to conquer the world or something.

There are times when I am baffled that Return of the Killer Tomatoes isn’t mentioned in the same breath as films like Airplane! or any of the Mel Brooks classics from the same era. It should be. When it comes to well executed and punchy absurdist comedy, this film is ripe for the picking and one of the best ones you are likely to find. From its silly concept of a mad scientist who has created a process to turn tomatoes into people to its offbeat love story, the foundations of Return are very silly and fairly formulaic. The film makers, cast, and crew are completely aware of this and, quite frankly, don’t seem to give a fuck if things seem out of context or silly within the narrative of the film. Return will regularly self-reference itself, including an entire sequence where the movie runs out of money and George Clooney comes up with a plan to save the picture by having product placement, which then becomes a hilarious running joke for the rest of the film, and it continually will derail its own narrative for the sake of a joke. A tense scene in the final act gets placed on pause as our two heroes call a time out from a referee, for example. The entirety of the opening sequence is a host who is introducing the movie, there are massive visual jokes to be had, and the film has no qualm with calling out its own flaws. If you aren’t ready to roll your eyes and just have fun with a movie, then you should probably look someplace else because Return is not one to shy away from being terrible in all of the best way...and do it with a sense of confidence that carries a lot of the film.

This kind of absurd comedy doesn’t always work for films, just taking a gander at all of the spoof films that arose in the wake of the success of the Scary Movie franchise will tell you that, but there is a sort of dedication and embracing of its own flaws that makes Return such a success. Director De Bello and the cast never hesitate to run with something if it works, but they are always smart enough to keep things in the back pocket if the joke works later on in the film. There are a couple of jokes that are set up in the opening act which are dropped and then make random appearances at the end – to which the characters then make comments about, for example. It also helps that everyone in the film is dedicated to the tone of absurdity that the film uses and the lead Chad, played with reckless abandon by Anthony Starke, is a great example of such. His character is very much the one that is the least gimmicky of them all, but his weird intensity and roller coaster emotions make him one of the funniest parts of the film. The entire cast has impeccable chemistry and that helps too.

There is a big part of me that is immensely glad to see Arrow Video crafting an impressive new HD version of the film for a release on Blu Ray because Return of the Killer Tomatoes is one of the best absurd comedies ever made. It’s so effective at it, that it’s no wonder the series continued on for two more entries, a cartoon series, and a video game. It’s a perfect storm of thoughtful meta writing, satire, visual punch lines, and randomness and I sincerely hope that this latest release of the film finds an entire new audience to appreciate how well it accomplishes a comedic style that can fail so easily. I don’t own very many comedies and this one is going to be one of the highlights of my collection.

Written By Matt Reifschneider
Posted by DarkReif at 12:11 AM