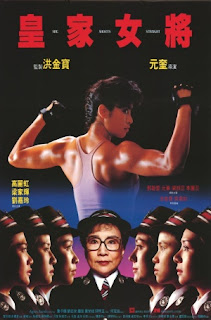 For me, there is something magical about late 80s/early 90s Hong Kong action films. Just like any other era and/or genre there is still a 3 to 1 ratio of mediocre crap to genuine awesomeness, but the look, the energy, and the feel of this era has always held a special place for me as one of the first non-mainstream film styles that I latched onto. One of the kings of this style and era is Corey Yuen, who, to this day, continues to offer his services as an action director and choreographer to inferior directors for a plethora of various films. One of the films I had not had a chance to dive into is the gimmicky – and oddly titled – She Shoots Straight. While the film has some issues with melodramatic plot set ups and narrative hiccups in the second act, I found myself very impressed with the ballsy twists and often shocking violence that She Shoots Straight uses to deliver its story. This may not be Corey Yuen’s best, but it’s one of his more chancy films that earns a lot of respect even if the execution is a bit patchy.

Inspector Huang Tsung-Pao (Tony Leung Ka-Fai) and Mina (Joyce Godenzi) are a recently wed couple ready to look at the next step in their life. What makes it complicated is that they are both cops that work together. What makes things super difficult is that Bo’s entire family is a family of cops – including his four sisters – who just are not a huge fan of their boss Mina marrying their brother. When a group of renegade Vietnamese thieves and killers stumbles into the family squabble, these young women will have to set aside their differences to settle a score.

When She Shoots Straight starts off, the film seemed destined down a path of generic Hong Kong action comedies. Oh look, it’s an entire family of cops. Oh look, it’s familial fighting while they are investigating a criminal plot. Oh look, it’s a newly-wed couple working through all of the above in a cute romantic way. Sure, the acting is solid throughout this portion and there is some fun to be had in the concept, but it wasn’t a thrilling movie overall. And then the film takes some of its darker elements, the violence of the action scenes and the coldness of the villains from this first half, and fuckin’ runs with it. At around the half way point, She Shoots Straight does not shoot straight and throws a couple of horrific curve balls at the audience to set up a much more dramatic and shocking second half. Granted, Corey Yuen is not the best at handling some of the dramatic material and there are a handful of emotional scenes in the second act that drag out a bit long giving the narrative a bit of road rash as it heavily maneuvers into the third act, but the shock of its right hook to the shift in tone is something to be respected and applauded in a movie that could have easily just taken the formulaic way. Important characters die, the violence becomes justified, and the story shifts from classic Hong Kong cop action into a revenge flick that I certainly did not see coming.

It’s this third act that truly makes She Shoots Straight shine through as an overlooked gem of this era. Combining the martial arts choreography of Yuen, the gun fu of popular Hong Kong films of the time, and the sheer manic energy of its emotionally drive revenge plot, She Shoots Straight ignites in the third act blending high octane action with a series of increasingly impressive stunt action set pieces. Both Joyce Godenzi and Carina Lau Ka-Ling shine as the leading ladies in the film, both as actresses and action stars, and their emotional roller coaster ride in the winding narrative is balanced out by a phenomenally cold performance from Yuen Wah as the main villain of the film. Car chases, hand to hand fights, a machete battle in a small ship hallway, and shoot outs litter the film’s landscape and keep things exciting and moving even when the film starts to drag a bit in its dialogue. Action fans who haven’t seen this are missing out on a massively impressive set of action set pieces that are worthy of seeing.

While the melodramatic pieces of the second act can be a bit rough to work though, more or less due to the over zealous cheesiness of it all than any knock against performances, the rest of She Shoots Straight hits like a two ton bag of bricks. It’s fun to get the audience hooked, but then it quickly takes its somewhat gimmicky pieces and manipulates them into a hard hitting revenge focused action flick worthy for fans to seek out. Not only does it stand out as a strong Hong Kong actioner, but it’s one that deserves more attention.