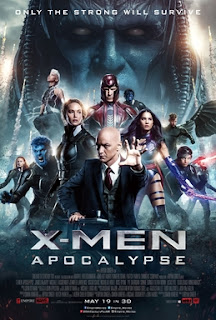 Expectations can be a bitch. When a series gets as much critical and fan acclaim as the new “rebooted” X-Men franchise has received, in particular with regard to the previous entry Days of Future Past, it’s only time until one of the entries disappoints and receives the flaming. Enter in X-Men: Apocalypse, the third entry into the latest series featuring a younger X-Men cast, and while it is a disappointment when compared to the previous two it’s hardly worthy of the horrendous (and dare I say, vicious) response from critics that is has received. As it is, Apocalypse is a fine X-Men film filled with plenty of entertaining sequences and fun pieces for audiences even if the film itself is a much more hollow experience compared to the previous two films. It suffers from some of the same issues that have plagued previous X-Men films in the past, but ultimately it moves at such a smooth pace that it never bottoms out the film like it could have.

Xavier’s school for mutants is becoming a bustling refuge for those out casted or looking for a place to  hone their abilities. When an ancient evil being (Isaac) is awakened in Cairo though, he looks to take his rightful place as commander of the earth by bringing about the apocalypse with the help of four chosen individuals – including a now rogue Magneto (Fassbender). To cancel the apocalypse, Charles (McAvoy) will have to gather together some of his strongest students to reform the X-Men…but will it be enough to stop an unstoppable force?

As with most of the other X-Men movies, Apocalypse rides a fine line with its ensemble cast that works as a blessing and a curse. At this point with the reboot franchise we’ve already run the course with a few characters (Mystique is starting to weaken as a lead character as she repeatedly sprints the same character arc), but the heart of this series remains strong with the Charles and Erik duality that continues to pulsate underneath the epic plot of this entry. As odd as it is, Magneto once again steals the show with his story – even if he somewhat disappears in the third act – and as the film bulks up its cast by reintroducing some of the characters we already know and love like Storm, Cyclops, and Nightcrawler, it seems to lose a bit of steam with the stronger character arcs that could have added much needed depth to the film including Magneto’s furthering distance from humanity. Apocalypse plays a more stoic villain, which worked for me as a balance to the more emotional beats of the protagonists of the film, but too many of the secondary characters feel a bit left in the dark. We’re not talking about some of the terrible character work that undercut Origins Wolverine or The Final Stand, but characters like Psylocke and Storm tend to be undercooked. There is a lot of fun to be had with the colorful cast, including another fun Quicksilver time stop sequence and the return of Nightcrawler is always welcome, but due to the size of the cast it’s just impossible for the film to be able to add so many new characters and give them the backing they need.


Despite its robust cast, Apocalypse does succeed in being an entertaining action flick overall. The story feels occasionally rushed, where they needed to make Magneto’s decision to join Apocalypse a bit more punchy, and it’s occasionally drug out like the opening sequence that’s obviously there to add in some spectacle even if the pyramid trap seems daft, but it moves at a quick enough pace that it’s able to be enjoyed and doesn’t burden the audience too much. The action is remarkably fun at times, even if somewhat unnecessary like Quicksilver’s second time slowing stint, and director Bryan Singer certainly knows how to keep things heartfelt in the meantime. Even an elongated action cameo from High Jackman as Wolverine seems fitting to get that piece in there. The inclusion of the “team taken by Styker” sequence could have easily been cut for time purposes, but Singer handles it so smoothly that it doesn’t feel unnecessary even when it probably is. This is the essence of the fine line that Apocalypse walks and depending on how invested you are in the characters and action it’s either going to feel like an exercise in excess or one that continues to entertain despite its flaws.

Overall, X-Men: Apocalypse might feel like a huge disappointment when compared to the previous two, but it’s an entertaining popcorn flick in its own right. When it works, like the new Magneto subplot or the fun battle of minds between Xavier and Apocalypse, the film is highly entertaining and boasts a strong sense of thoughtfulness that has kept this franchise relevant since its debut. When it struggles, with its robust cast for example, that’s when it seems to struggle a lot and buckles slightly under the epic weight of its concept. Apocalypse might not be the best X-Men film on the block, but it’s definitely not the piece of shit that so many critics hailed it as when it first dropped in theaters. Fans of the series will still find plenty to love in the small detailing and fun performances. Ultimately, that’s what matters in the end. Apocalypse is not the end of the world (or franchise).