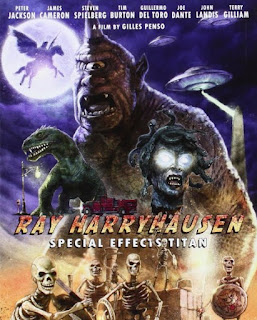 If it wasn’t for Ray Harryhausen, a site like Blood Brothers wouldn’t exist. For us, his work as a special effects artist and animator was something of a childhood favorite and his impressive catalog of creatures fueled imaginations for an entire generation of film makers and fans. While documentaries are rarely covered here on the site, it was only my pleasure to be able to cover the one based on his robust catalog to be released on Blu Ray through Arrow Films called Ray Harryhausen: Special Effects Titan. While the film itself is a fairly straightforward documentary, for cinephiles and those interested in the historical elements of film, it’s one that comes with a big recommendation for its insightful look into Harryhausen’s career.

Special Effects Titan is mainly focused on covering Harryhausen’s film career through various older and newer interviews that are intercut with tons of clips from his movies and the various movies that pulled inspiration from him. As a documentary, it moves in an easy to consume manner, working chronologically through his filmography with his early works that got him into the industry and moving through his retirement. Seeing the clips and the comparison shots of the various themes of his work and how he was able to create characters and narrative through his animation is certainly fun and well done, but it’s seeing the joy, awe, and magic in the faces of some of the film industries heavy weights that really shines as the best part. When you see talented film makers like Steven Spielberg, James Cameron, and Peter Jackson all talk about his influence on their own work, it’s hard not to fall in love with his already impressive material. To make things even more impressive, the documentary uses a lot of clips of Harryhausen himself talking about his process and philosophies toward film as it goes through each feature and the catalog of creatures he created. It’s this kind of heart and soul to his work that made it so magical and it’s nice to see the documentary keep it these philosophies in the narrative instead of just focusing on the films themselves. 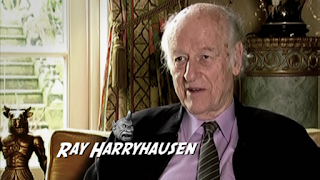 At times, I wanted the film to go even further into some of the post retirement stuff that Harryhausen was involved in, perhaps go into Peter Jackson’s quest to save a lot of the behind the scenes film or even a bit more into his early life to see just how he came to be the person he was as a filmmaker. This Blu Ray is packed with special material, deleted scenes, and various extended Q&As (which gives some serious depth to the already packed documentary), but none of it quite covers some of these other aspects that I was hoping it would touch on. The documentary itself is already packed, so it's an understandable edit as his career is a big enough focus. 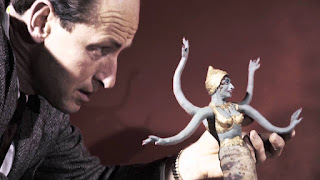 Still, Special Effects Titan is a well-executed and smooth documentary worthy for newbies and fans of Ray Harryhausen’s work. It’s remarkable and fun to see the collection of talent that they got to praise Harryhausen’s career and the behind the scenes pictures and footage of the films is worth the purchase alone if you are a fan of classic cinema. I was hoping for something a bit different than just a chronological coverage of his filmography, but for what is on display it works with effect proving why Harryhausen is such a significant figure in the cinematic world and one that is still relevant to this day.

If anything, it made me crave seeing a lot of these films again. I will probably have to go bust out my copies of 20 Million Miles to Earth and Jason and the Argonauts to feel the magic.