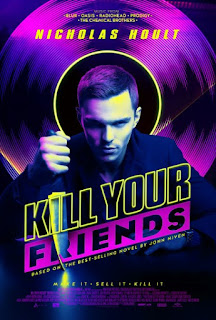 Sometimes, particularly when you dredge through the undercurrents of modern cinema, one gets the scent of what will become a cult classic in the near future. Dark comedies are always ripe for this path as they alienate the mainstream audience with their subject matter or style and usually only secure funding if they are tight and effective at being a dark comedy. Kill Your Friends is exactly this kind of film. It’s an effectively written and executed dark comedy that lathers on a sort of horror tinged charm to its proceedings while maintaining a quirky vulgar edge that perfectly fits into the ‘cult classic’ category. While it’s not up to par with the likes of American Psycho in setting standards for the style, it ably nestles itself to being a film that can easily be mentioned in the same conversation without skipping a beat – which is a huge compliment unto itself.

Steven (Hoult) is a brash and ambitious young A&R man for a British music label in 1997. He’s vicious, unrelenting, and underhanded which is perfect for the industry. He’s looking for a promotion though and nothing is going to stop him. No matter what. No matter who he has to screw, manipulate, undercut…or even kill.

To say that Kill Your Friends isn’t the film for everyone might be something of an understatement. There are dark comedies and then there are films that are dark enough they just happen to be funny – for those with the right sense of humor. Kill Your Friends falls into the latter category. On the surface, the film is a hybrid of drama, thriller, horror, and comedy, but the comedic aspects of the film only really rise to the surface through the film’s quirky style and oddly cold approach to its often abrasive subject matter. Our protagonist Steven leads the audience down a fantastical path of sociopathic tendencies using his vulgarity and thought bubbles as a kind of charm that allows him to survive in the cut throat industry of mid 90s music labels. Nicholas Hoult alluringly handles the often shocking, but truthful demeanor of the lead, further proving his talents as one of the best actors in the scene that doesn’t garner nearly enough attention. He’s surrounded by a diverse and effective secondary cast that really feed into Hoult’s own performance which gives the film a sort of pulsating energy that works wonders. Steven is not an easy role to handle, but Hoult’s performance carries the film impeccably and gives the character that sharpness needed for Kill Your Friends to gel.

However, I think the true star of the film happens to be the combination of director Owen Harris and screenwriter John Niven (who is adapting his novel for the film) which translates to an offbeat style that keeps the audience nervous. Films with narrators – and more specifically narrators that break the fourth wall – can be a train wreck if not handled properly, but Kill Your Friends handles it with the utmost ease. The film does occasionally struggle with taking the novel’s structure and translating it to the screen which results in a third act that seems rushed to wrap up certain subplots – some, like the story of a black mailing secretary come as a shockingly effective surprise, and overall it actually works in the film’s favor as it keeps the audience on their toes. At times, it feels as though they needed to simplify things a bit more to give the film a sharper edge, but the style visually and conceptionally had me hooked. Again, it’s not a film for everyone as it seems to embrace its abrasiveness, but Kill Your Friends works its own quirks with remarkable finesse.

As far as dark comedies go, Kill Your Friends is top of the pack and worthy for those of eccentric tastes to seek out and see. Truthfully, this will end up being one of the better comedies released the year and it’s sad that it will probably end up being an overlooked gem. So if you are reading this review for whatever reason, you should support it with a purchase and share it with your friends. It’s not often that people can be on the front wave of a future cult classic, so now is the time to start cheering on the awesomeness of Kill Your Friends.