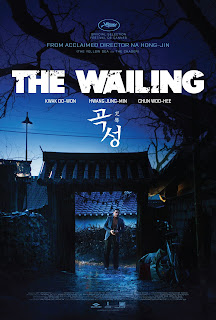 At this point, I feel like Na Hong-jin is just fuckin’ with us. There is no way that a director takes his first three feature length films and drops three instant classics. Not just cult classics, but true cinematic classics that rise above their assigned genres and edgy non-mainstream elements. His latest film, the horror thriller The Wailing, is just one more film to add to his already impressive cinematic streak of glory. While The Chaser and The Yellow Sea both redefined the thriller into modern effective tales of woe and shock, The Wailing defines what a modern horror film should look like while retaining the same effective style and writing that made his previous two outings so bold and real. This film will knock the wind out of you. It’s a film that defines the best of what horror has to offer by building a real world with characters you care for…and then utterly destroying it all in front of you. The Wailing is the kind of outsider cinema that every film maker should want to make - thoughtful, shocking, thrilling, and ultimately devastating.

Jong-goo (Kwak Do-won) is part of a small town police force and he’s not even that great at it. The rumors and speculation of the town folk start to spread after a handful of murders linked to a mysterious illness shock the town. When his own daughter comes down with the illness though, he’ll have to put his own disbelief aside and partner up with a shaman (Hwang Jung-min) to uncover if there is a person behind these horrific events.

Perhaps the best part about The Wailing is that it is the kind of horror film that builds itself up like one of Hong-jin’s thrillers, keeping the audience guessing and hooked with its complex and layered story. This is also going to make this review something of a hard one to write as I attempt to not spoil anything about the massive amounts of twists that boil to the surface as the film plays on. The film is very, very good at snagging the audience’s attention and then dragging them kicking and screaming throughout its narrative of nightmarish spirals and shocking shifts. The film is fairly long, clocking in over two and a half hours, but the way that The Wailing unfolds never drags nor does it feel forced in any way as it shifts from a thriller driven first half into a full on horrific second one. It’s a film that keeps one guessing, right from the start, and uses that mystery to full throttle itself into a pulse pounding third act that will have viewer’s at the edge of their seat breathless.

This bombardment of twists and shocks is accomplished through a variety of techniques including the darkly comedic elements of the first act. The film almost comes off as a dark comedy at this point as we are introduced to an odd family dynamic for Jong-goo and his own semi-hilarious idiosyncrasies. He’s always late, his daughter is cute as a button, and he’s generally a terrified person of most everything. He’s surrounded by the usual assortment of small town simple folk, including an inept police partner, and it gives the film a comfortable feeling of familiarity. This is key to the turning points of the film, where our protagonist begins to investigate a particular Japanese man on the edge of town which layers in a bit of xenophobia to the plot, and it balances out the darker tones and brutal violence that will be on display at later moments. The Wailing never loses sight of either the odd humor or the heavy dark bits throughout and it perfectly balances this sense of the familiar with the occult elements of the unfamiliar to give the film a wonderfully jagged tone. This is how director Hong-jin manipulates the audience into being able to understand the stakes, but keep them on their toes even from the first ten minutes. We are about Jong-goo and his family and The Wailing will not let you forget that feeling even when shit hits the fan.

The Wailing also does an amicable job at keeping the audience unsure of what tropes are going to be used by shifting the genre slightly this way and that. What starts off as a thriller leads way into a plague concept (which in itself features a handful of scenes that might have been stolen for an A-grade zombie film – including a brutal encounter with an infected person on the edge of a forest that is both horrifying and somewhat hilarious in its timing) before slyly moving towards an occult and religious tone for the third act. The addition of the shaman, played with perfect blend of tongue in cheek ridiculousness and dramatic subtlety needed by Hwang Jung-min, marks this shift a bit, but Hong-jin is perfect about establishing doubt in the audience that anything is all that real in this film and it makes for one of the most tense finale’s you are likely to see this year because you don’t know what tropes he is going to be playing off for your expectations.

In a way, all of these pieces make The Wailing a film that perfectly plays on what makes people uncomfortable. It has elements of xenophobia, religious doubt, isolation, and mysterious circumstances that always seem two inches out of the reach of understanding for the characters and audience. It hooks the viewer in with its impeccably diverse and heartfelt performances, the perfect seeping horror atmosphere of its setting and cinematography, and a director that simply understands how to balance connection and disconnection for the audience to feel unsure of what is about to happen. It may not be a film for everyone with its heavy concepts and bursts of brutality, but this comes with only the highest recommendation we can give at Blood Brothers. The Wailing is the essential horror film of 2016 and it’s a film that will only get better with repeated viewings that allow the viewer to really peel back its dense layering.

If you get the chance, one should absolutely see this film in theaters for the atmospheric experience and then purchase a home video version for continued analysis of why this film works so well. The Wailing is just one of those films that rises above genre definition to be an instant cinematic classic.