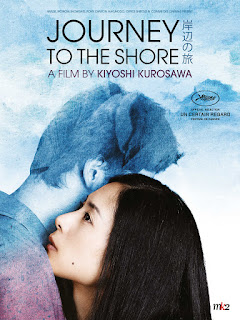 I walked away from this film as irritated as I was pleased and thankful that I had the chance to see this newest outing (save Creepy, which I think hasn't even opened in Japan yet) by longtime favorite of mine, Kiyoshi Kurosawa (Cure, Retribution, Tokyo Sonata). It's a film that is slow, beautiful, heartbreaking, and at the same time it's uninteresting and dull in parts. Oddly, I think it works in the end, though I couldn't help but find myself not caring at moments, but I'll get to that later.

First off, I want to jump straight into the acting and say from the get go that Tadanobu Asano and Eri Fukatsu perfectly embody and sell their chemistry together as a couple. I never had a moment of disbelief, and I think that is what elevates this film, aside from the usual stuff you expect in a KK film (mood, atmosphere, and the overall look of his works are always something to be had). I have always admired Asano, and I think this is one of the better performances he has given in recent memory.

Essentially this is a ghost tale between a woman and her deceased husband who comes back to stay with her. He isn't what you would expect as a ghost, and it seems quite a few people can see and some, even make physical contact with him. I didn't quite fully understand exactly how that worked, seeing as how there were multiple ghosts who came into the picture on their journey throughout, but perhaps it lays in a cultural steeping that I am unfamiliar with. Something I need to look into more, but I digress.

As I mentioned before, the film is gorgeous to look at. Ranging from very wide shots, to up-close and intimate reactionary shots, I could feel and absorb every emotion that the two leads, and even the supporters for that matter, gave off in each and every scene. I think it is a wonderfully crafted film that is too bloated for its own good.
I spoke with someone else recently that slow cinema works well if all of the pieces fall in place, and it is hard to put into words exactly what that feeling is, but you just know if it does or doesn't do what it is supposed to. I think the film walks a fine line between being a dud, and being something more.

Emotionally, it does work. I won't spoil, but a moment towards the end left a certain sting and feeling I wasn't quite expecting. It was beautiful and I was completely taken aback. I wish more moments like that were placed throughout. I mean there are a ton of great pieces, but there is far too much filler between the moments that, once again, leave you wanting more.

Journey to the Shore is a film I do not regret watching, and can easily recommend to the right audience, just know that it isn't anywhere near perfect, but it has just the right emotional core, that it is worth the sit. I have this gut feeling that this is one of those films that may get better with repeat viewings as time goes on, but for here and now, I think it's most certainly good, just not great. Recommended to the right audience (you know who you are)!