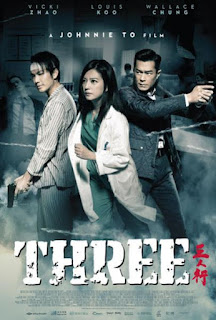 Johnnie To has always remained a chameleon as a director. He’s always changing and shifting through various genres, fitting his style to each one like a versatile coat of arms, pushing and challenging boundaries as he goes. As the genre fan that I am, it’s his gangster and cop films that really stick out as his best including the likes of Election, Exiled, and Drug War to name a few. His latest film to reach the US, courtesy of our friends at Well Go USA, is the cops and robbers flick Three. Just like some of his other films, this isn’t your cut and dry action thriller. Once again To is all about pushing boundaries and he does it again with this one. Most of it works, some of it doesn’t, but it’s hard not to love what To does here stylistically as he crafts a minimalist, teeth gritting thriller that is demanding of an artful respect. It’s not a perfect film and it certainly falls short of his last US release Drug War, but if you’re a To fan or love a solid and pulse pounding film it’s hard to go wrong with most of what Three has to offer.

It has been a rather stressful day for a young doctor (Vicki Zhao) who is under pressure from her superiors after a few surgeries have taken turns for the worse. Her day is about to get a bit worse when a vicious criminal (Wallace Chung) is brought into her hospital with a gunshot wound to the head and she is torn between helping out the cold police officer (Louis Koo) with his borderline brutal treatment of the criminal or doing her duty as a doctor and pushing to save his life.

Calling Three an action thriller is almost a disservice to those going into the film. This is a film that is pure atmospheric thriller through and through until the final 15 minutes. We will get more to that final act in a second, but don’t go in expecting Three to be a shoot ‘em up cops and robbers kind of flick because it isn’t until that final act. More or less, while both Wallace Chung and Louis Koo share lead role credits, this is a movie about the moral grounding of doctors and the problems of their work environment that happens to be set in the aftermath of a shootout between cops n’ crooks. Johnnie To loves to play in this morally gray area in his films and Three is no different. The majority of the film, all the way until the final 15 minutes, is a minimalist thriller where Vicki Zhao’s doctor must navigate a complicated series of events and characters to try and discover the truth. The film doesn’t even show the events that lead the police and their criminal to the hospital and thus this isn’t a film about the crime. This is a film about the aftermath. The narrative approach allows the other two leads, both played with the on screen pop expected from them, to really dig into subtle shifts and enigmatic performances. There is no ‘good guy’ and ‘bad guy’ as the film repeatedly adds in questionable pieces from each side and, like the doctor, the audience has to start putting together the story themselves.

Since the film is also crafted in a “real time” scenario, where things do not leap back and forth, Three does have to ultimately rely on a lot of tricks and atmosphere to sell its thrills so that it doesn’t get boring. This allows for some very exciting and insanely tense sequences that normally may not be that way – including a seizure moment that had me holding my breath, but it can also mean they need to add in some sub plots that don’t flow as well to keep things moving. A smaller plot featuring cult actor Lam Suet and his investigation of a whistling business man works in the overall scheme and has some great beats, but feels under developed to be as tense as it could have been. It’s the nature of building a minimalist film that these things may not always feel layered enough, but it’s only a few scenes that feel that way. The rest of the film simply destroys the concept with expert execution.

As promised, let’s talk about the final 15 minutes of the film. There are a lot of twists and turns that lead the audience to this point, so I’ll do my best to not spoil anything, but the final 15 minutes is a very ambitious action sequence…perhaps a bit too ambitious. About half of this finale is filmed as a “single take” slow motion shot where the camera whips around the hospital floor navigating through all of the various characters as a massive shootout occurs. Despite some odd CGI at times, this is a very, very ballsy explosion of consequence to all of the atmosphere and tension that has built up throughout the rest of the film. That is then followed by a more traditional chase piece through the hospital that is – and this is unfortunate – plagued by weird cut away scenes for the doctor and patients. It’s also a sequence that is undercut by some terrible CGI that really derails what might have been one of the most exciting action set pieces of the year. The action of this finale is ambitious and for that I give it mad props, but it feels undercooked with its blatant CGI backgrounds and awkward edits to wrap up unnecessary sub plots. Still, this finale works for what it wants to accomplish, but considering the high execution of the previous hour of the film it feels off.

Even with the issues of the finale and some narrative speed bumps, Three remains a very impressive and ambitious film. It may not rank up there some of Johnnie To’s best crime films like the three mentioned in the opening, but it still carries a lot of his trademark punch and vicious execution. Fans of Hong Kong action thrillers are definitely going to want to dig into the phenomenal acting performances and atmosphere that Three has for them, but keep your expectations tempered a bit. It’s not a perfect film, but it’s one that shoots for the stars and that always deserves some serious respect.