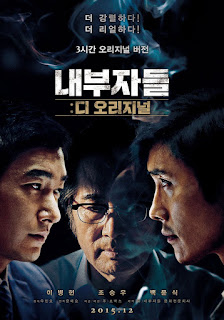 I will say after seeing this film, my 1st thought was that it was one of the best Korean films I've seen in quite some time, and I stand by that. Inside Men: The Original a.k.a The Director's Cut, is a 3 hour long gangster film with a political bite to it and it's brilliant.

There is so much that happens over the course of this 180 minute film, that there is no way to remember every single detail, and I am glad, because already (minutes after just finishing it), I am quite excited to give it another visit. I feel it is a film that one can appreciate more after repeat viewings.

I won't go much into the plot, but it's full of twists and turns and backstabs and betrayals... which is what you would expect of a film like this, and it delivers everything in spades. The acting is phenomenal, with all 3 leads hitting the heaviest that any of them have in quite sometime. I will get into everything later, but the technical prowess of the film is equally as impressive, and is filled to the brim with gorgeous shots.

Inside Men is yet another fine example of why Lee Byeong-heon should just stay in Korea and not be stuck in the likes of Hollywood blockbuster schlock. The dude is a force to be reckoned with and yet... well I'm getting sidetracked, but this probably his finest performance since I Saw the Devil, back in 2010. His character has a fantastic arc, and I think the same can be said for each of the 3 leads.

As I say that, the villain pretty much stays a cold, slimy bastard the entire time, but he is played very well by Baek Yoon-sik, who I think knocks it out of the park. He is so easy to hate, but he never once feels over-the-top and is evil is subtle but potent. Was ready for him to be offed right from the beginning. Bravo Mr. Baek, bravo!

Rounding off the cast of leads, would be Jo Seung-woo (Tazza) who delivers without a doubt the best performance of his career thus far. A man with a past who changes his ways for the better and well, you'll see, but the ups and downs of his character are very strong and a highlight, among the many in this movie.

Another thing worth mentioning is that earlier on, the film has quite a bit off dark humor in it, and I quite enjoyed it. It also doesn't mind winking at the audience, but never to the point where it takes you out of the experience. A great example for me, which doesn't spoil anything at all really, would be when Lee's character walks up to a fridge, grabs a beer from it, immediately we cut to an extreme almost commercial like close-up of him drinking from the can, and he turns to the camera, and then my annoyance is quickly discarded as he obnoxiously belches before slamming the can down and carrying on with his dialogue. It's like "Here's your product placement!!! *middle finger*". There are plenty of little moments like that scattered about, that I truly appreciated.

Also, which I don't mention a lot in reviews, is I thought the score for this one was fantastic, it goes from these dark, punchy synths, to stringed orchestral tones, back to the synth and it also works. It's never really distracting either, but once I did notice, I tried to keep an ear out for what it had to offer, and in the end, only added to an already great film.

Lastly, I want to mention that there is a lot going on in this movie that speaks and rings true to the politics and corruption within Korean society. I cannot speak firsthand on the subject, naturally, but there were so many lines said throughout that had me thinking about the harsh realities that some of the people face over there. I've spoken with some of my friends, and they said they couldn't believe how truthful the film was, going as far as to use actual companies as the backdrop for the film. I think things like that are impressive and should be noted.

I could go on and on about how much I appreciate this one, and would love to, but for everyone's sake, I will stop now. Inside Men: The Original (can't vouch for the shorter cut sadly), is one of the finest films to come out of Korea in quite sometime, and is without a doubt, leaps and bounds better than the director, Woo Min-ho's, previous two outings. If this is a sign of things to come from Mr. Woo, than I will gladly follow him. As it stands right now, Inside Men is my favorite Korean film of 2015, even though I am just now seeing it. Absolutely fantastic and should be seen by all fans of the region's cinema.