Perils of the Sentimental Swordsman (1982) 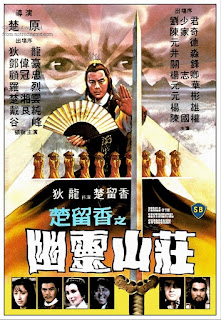 For the first twenty minutes or so, I was fairly confused by Perils of the Sentimental Swordsman. I had enjoyed the previous two entries of the series, but right away the tone of this film felt different – less dramatic, more off the cuff – and Ti Lung’s character was completely different in his actions and demeanor. After a quick pause and five minutes of research I found out that Perils is actually not a sequel to the Sentimental Swordsman franchise, but it’s a sequel to another wuxia series from Chor Yuen that stars Ti Lung. It’s the same series that features films like Clans of Intrigue and Legend of the Bat. With proper expectations, Perils became a fun film filled with some outrageous fantastical set pieces and plenty of memorable battles that I was able to enjoy once my expectations had been adjusted for the proper franchise, but keep this in mind when going into the film. It is probably not the film you will be expecting to see from its title.

Liuxiang (Ti Lung) has been tasked with protecting the 8th prince from assassination, but the events of the night take a turn for the strange when it’s revealed that he IS the assassin. On the run from the law, Liuxiang meets up with an old man on his way to a remote village hidden from the outside world. The remote village is a place where criminals and villains can take refuge for the rest of their life…for a hefty price. When Liuxiang gets there though, he finds that not everything may be as it seems and there is a much bigger conspiracy afoot than previously thought.

Even without skewed expectations due to the strange titular issue that made me think Perils was a sequel to a whole different franchise, this film is meant to be somewhat confusing throughout its first half. Although I’ve seen Legend of the Bat (a film that is referenced at one point, although more as an offhand comment than a connection), I felt taken back by how the film opens and its treatment of the lead character. Liuxiang is not an assassin as much as he is a high energy wuxia Sherlock Holmes in previous films, so what in the world lead to the events of this film? Fear not, in true epic wuxia fashion, Perils does attempt to at least acknowledge its own mystery focused plot that leaves the audience unsure for the opening half. As the film works its way into the plethora of coils that the plot takes in the second half, it keeps things moving at a lighting pace. The battles are plentiful, the characters are colorful, and the narrative is fantastical in its embrace of some of the odd narrative elements. Within the first half hour, there are assassins for assassins, side plots that pop up and dissipate, and enough red herring characters that are established to keep the audience on their toes. It can be a lot to digest, for sure, and I would be lying if the second half actually covered everything in a way that made sense, but the film is a lot of fun with its gimmicks and quirky approach and that counts for a lot when it comes down to it.

It’s the second half however that really earns some praise and lifts Perils into being one of the more entertaining wuxia films I’ve seen from the Shaw Brothers studio. The first half establishes a lot of odd characters and ones with shifty motives, all played with a sense of fun and glee – including a phenomenal supporting role for Lo Lieh who carries a ton of on screen chemistry with our lead Ti Lung, but it’s the plot spins and pirouettes that occur in the second half that just strike home. No one is who they seem to be and the film machine guns out twists that just keep adding to the fun. The action remains tight, utilizing some phenomenally fun gimmicks and odd sets (with underground caverns and hidden ambushes galore), but it’s the jack knife maneuvers for the audience that really make Perils a blast to watch.

One doesn’t have to watch any previous Sentimental Swordsman or Liuxiang films to be able to enjoy Perils of the Sentimental Swordsman. It might be best to go into the film knowing as little about the plot as possible so that all of the twists and turns come as genuine surprises.  I’m not so sure that this fantastical wuxia mystery film will hold up as well on repeated viewings, but it certainly took me by surprise as a fun and exciting popcorn martial arts flick. One that definitely gets a big recommendation.