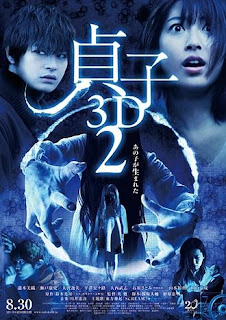 One of the problems with being a foreign cinema enthusiast is that there are many films that never get a North American release. Truthfully, I feel somewhat blessed that we have gotten as many of the Ringu films as we have, but it’s still a bit irritating when I have to hunt down and import the latest entry into a successful franchise. After waiting a few years for the release of Sadako 3D 2 (or as I will refer to it from this point on, Sadako 2 because the 3D bullshit in the title is dumb), I finally caved in to see what the reboot sequel had to offer. While the original Sadako wasn’t nearly as strong as I would have hoped, this second film – a direct sequel that even brings back a few of the characters from its predecessor – does improve on a few aspects that hindered the first film, but still fails to provide a smooth and un-awkward experience for its viewers. Considering some of the bat-shit insane concepts that previous entries into the Ringu franchise has provided fans, it’s not completely out there but it still has trouble finding a definitive foundation to build its themes on.

Fuko (Miori Takimoto) has been helping her brother Takanori (Koji Seto) raise his young daughter Nagi (Kokoro Hirasawa). After Sadako was defeated at the hands of his significant other, Nagi was born, but her mother died in childbirth. He’s been somewhat disconnected in the five years since and Fuko has been the one that has to raise the young girl and be there for her. However, the people around Nagi have been mysteriously committing suicide and Fuko starts to believe that perhaps this young girl might not be the offspring of her family.

While Ringu 0 took the Carrie route to exploring the Sadako story and its themes of misunderstood youth, Sadako 2 goes about it in the classic Omen manner. Returning director Hanabusa seems to understand this fairly well and the film follows very similar patterns and beats from the 70s classic. We have an adult, played with some impressiveness by Takimoto, who begins to suspect that something is wrong with the child, goes to investigate the matters, discovers a horrendous evil on hand, and then must struggle with the emotional weight of what it may take to end it. For horror fans, the narrative will be decently predictable even if the film does it with a modern J-horror spin. Towards the end, the film occasionally breaks from the atmospheric tone for a more fright heavy approach, pulling inspiration from The Evil Dead as people seemingly become possessed by the spirit of Sadako and kill themselves/others which seems a bit out of place, but generally speaking the more focused tone of the film works – even if it is a bit cliché. The film attempts some silly plot twists towards the end and develops a handful of subplot elements that raise questions never to be answered (with an obvious intent at further exploring them in a sequel we have yet to see and perhaps never will) which serve their purpose but hardly excite in the ways that the film wanted them to. There is even a final twist that really doesn’t make sense at all if you start to think about it. All in all, the narrative and plot is patchy at best, but the intent is there and the apparent effort does deserve some appreciation.

What Sadako 2 does improve on over Sadako is that the film has a much more cohesive and less eye-rolling visual style. The 3D gimmick is not nearly as terrible and obvious this time around and the film doesn’t have such an obvious cheap ‘made for TV’ look like its predecessor. This gives it more of a polished visual style. While there are plenty of jump scares that can be obvious (and a bit questionable if they use CGI), the rest of the film has some striking moments that work. Our protagonists descend down a spiral staircase that had me a bit motion sick and there are some repeated flash back sequences that blend with the current plot line that work to invoke some solid character depth and emotion that I wasn’t expecting. Sadako 2 is not nearly as effective as some of the earlier entries into the Ringu franchise with its atmosphere, vague plotting, and visual punch, but it’s hardly a poor film in those regards either.

Sadako 2 is still a mediocre film at its best and lacks the cohesive narrative style and truly effective tension to utilize its Sadako influenced Omen approach to its maximum benefit. There are a few too many plot threads left unfinished and there are a few tidbits that are seemingly thrown in just for scare purposes that don’t reflect on the story itself in positive ways. On the other hand, there is a charm to its new approach for an already uneven franchise that carries it though, powered by some clever themes and strong moments where the execution, narrative, and horror all align. Sadako 2 is mostly for fans of the franchise, but there are still some shiny moments that keep this franchise feeling fresher than it should.