Chonicles of the Ghostly Tribe (2016) 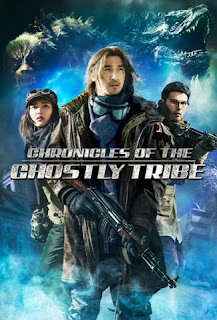 It’s no secret at this point that the Chinese film industry is something of a juggernaut in the international box office. As their box office exponentially grows though, so does the size of the films that they begin to produce. I’ve touched on this subject in some previous reviews of newer Chinese films, but it’s probably most apparent in Chronicles of the Ghostly Tribe. Like the odd focus of Hollywood to develop the next big fantasy driven franchise that’s build on spectacle for sheer box office revenue, Chronicles of the Ghostly Tribe desperately wants to lay the foundations for an expansive universe of fantasy/science fiction elements. This focus, however, makes for a film that ultimately feels a bit hollow and oddly structured to stand well on its own two feet. It’s fun and it has moments that sparkle, but this is pretty standard popcorn flick material and rarely more than that.

Hu Bayi (Mark Chao) was part of a secret expedition into a cavern in the late 70s with renowned professor (Wang Qingxiang) and his daughter (Yao Chen). However, after a series of horrifying events, he’s left as the lone survivor. Studying about the events lead him to a theory about the Ghostly Tribe and when the professor and a woman who seems to be his daughter reappear, Hu Bayi will have an opportunity to find some answers.

Fortunately, Ghostly Tribe is a film with potential…if it gets franchised. This is because the film leaves a lot of unfinished concepts, plot lines, and characters hanging in the wind for that “eventual” sequel to come. The movie did decent in China, so there’s a possibility, but for a film that needs to stand on its own to kick start the franchise it seems desperate to lay out those threads for future entries. For starters, the structure of the film feels misguided. The entirety of the first half hour is more or less spent getting in a ton of plot and foundations for the rest of the film. It’s only for barely a handful of minutes before it starts shoveling in spectacle sequences and building mystery for the events later on. The finale of the film, a sort of fun post-apocalyptic (in tone) western like siege action sequence feels more like one that should have occurred in the middle portion of the film and the opening tomb raiding sequence has the look and feel of a finale, not of a starting point because there isn’t any spectacle in the film that can top that sequence. While there are moments of strength in some singular scenes, including a scene where our hero Hu Bayi sees a vision of his lost friend on a train, the order and flow of the narrative undermines a lot of the strength of what they could have held. It wants to build mystery, but that mystery seems fleeting without the dramatic foundations. This is a film that tries to be too epic too quickly and it leaves the rest of the film feeling out of breath.

Ghostly Tribe also fails to actually build characters that truly intrigue. A major plotting point is a romantic relationship between our hero and the professor’s daughter in the expedition, yet we see only fleeting instances of such and despite her kind of silly, but ultimately awesome “demise,” it leaves the motivations for the rest of the film feeling flat. This happens again and again with various secondary characters and their relationships to each other and the lead. Oh, he has a distrust of a military leader? Oh well. His new myth teach at the library is kind of cool, too bad he kind of shows up randomly and the film leaves that plot hanging by the end of the second act. Even his best friend and their relationship seemingly comes out of nowhere and really seems forced.

While The Ghostly Tribe deservedly receives some harsh criticize for its focuses as a film, it does earn a few points credit for being fun and adventurous. As I mentioned, there are key moments that work and action set pieces are certainly fun and outrageous. While the opening spectacle of the team’s discovery tries its best to be epic, director Lu Chuan has a lot more fun with the finale where dog like demons are hunting down the hero and his comrades in an abandoned oil town. While most of the film lacks that depth or dramatic element to make it as effective as possible even in the action pieces, it was hard not to appreciate the popcorn cinema aspect that Ghostly Tribe has in these entertaining moments. Give credit where credit is due and that’s where this film does shine.

All in all, Chronicles of the Ghostly Tribe might end up being a better film when a second part (if a second part) does come out because it will be able to flesh out a lot of the hollow, rushed, and poorly structured issues that this film has at its foundations. On top of that, it’s a fun adventure film – a perfect companion piece to the superior Mojin that was released earlier from Well Go USA – but it rarely rises above its popcorn antics. For those who want a slightly epic science fiction fantasy adventure, this film will fit the bill. It doesn’t quite go out of its way to more than a rainy afternoon watch though on its own.