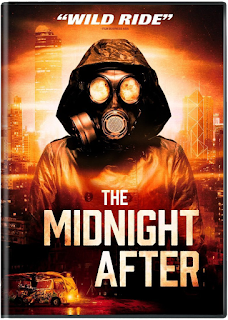 Since the day that I saw the short film “Dumplings” as part of the anthology film 3 Extremes, I have been waiting for Fruit Chan to release another film that would hit as hard as that one. It’s not like he does a lot of films as a director, but each time I wait for him to knock one out of the ballpark and sigh in disbelief when he doesn’t. His latest film The Midnight After, a film adaption of a cult online story, arrived last week and I held my breath again. The concept sounded intriguing, but could this be his time? Could this be the film where Fruit Chan finally matches Dumplings? The short answer? No. The Midnight After is not even close to matching the heights that Fruit Chan previously touched with his offbeat horror flick. The more complicated answer is that I’m not even sure that The Midnight After can constitute a full film. Not only is this film scattered, unfocused, and muddled in its narrative approach, but it never feels like there was a purpose or intent for it by the time it ended and the credits began to roll.

It’s just past 2 a.m. and the life of the city is still bustling. A minibus carrying a handful of very diverse and unique passengers is going about its normal route, taking a slice of life with it as these folks go about their own lives. When they emerge from a tunnel on their run though, they find that the city is now deserted. No cars, no people, no evidence of human activity. The phone and internet works, the electricity and water are still on, but there’s no one there to use it. Together, this rag tag band of people will have to cope with the idea of their isolation and uncover if they are truly alone before they end up dead.

If I were a funnier writer who embraced my ridiculous thoughts, I would be tempted to write this review like this film unveils its story, characters, and plot. I would write things in utter non-coherence, where sentences have no order or focus, words seemingly put together like someone shooting them out of a shotgun and hoping that that make something that resembles logic, and then haphazardly editing it all so that it looks like there is something underneath, but really it’s just garbage. That’s how The Midnight After reveals its narrative and characters. There are pieces here and there that work, just like the scattered words of a sentence that’s out of order and just happen to fall together. When the film embraces its Twilight Zone inspired atmosphere and focuses on character interaction, it builds something that could have been quite wonderful, thoughtful, and impactful. After the gimmicky first five minutes or so of over styled introductions to characters, the film takes a turn for the better by giving the audience tidbits of information and smaller characters pieces for its ensemble cast to chew on. When they first discover their predicament, it leads to intriguing arguments and dialogue about how to proceed. There are even bits later on that work, including a sequence where our main protagonist receives a mysterious phone call that adds to the story of what happened to them. Unfortunately, it’s like the film took all of these pieces of a thoughtful movie and just sort of threw them on screen hoping that it would make sense. It doesn’t and it leaves the film feeling horribly unsatisfying and scattered.

Perhaps the issue that The Midnight After has with its narrative is that it simply doesn’t know when to be vague and when to flesh out things. As mentioned, there are moments that work, but in the grander scheme of the film they may not. The decision to give various characters flash back sequences to the night before their disappearance adds some nice depth but it comes much too late and doesn't feel coherent with the narrative. It makes no sense to have it there unless it’s relevant to a reveal later on – which they are not. The film spends too long on scenes that don’t need the time or effort, including an entire subplot featuring a rape scene that feels like it has no depth or connection to the whole outside of some solid performances, and adds in a ton of twists that go nowhere. The Midnight After establishes a ton of clues and smaller details that never get used or explained. Not in a vague and thoughtful manner, no, it just randomly throws things into the film that the audience will be left hanging with. It’s frustrating. It’s as if there is no third act to the film. The climax that we do get, that includes one of the most awkward CGI vehicle flips I have ever seen on film, makes even less sense than the rest and there are no answers to any of the questions or details that are thrown in. It's like watching two-thirds of a movie and one that feels like its still in the rough cut stages.

To give the film some praise, the pitch black satire and super dark comedic elements do work. One part horror and one part science fiction, The Midnight After might have trouble blending the various genres it crosses into, but the comedic timing of most of the film works. The stellar cast, including  legends like Simon Yam, Kara Hui, and Lam Suet carry a lot of this ability to bend dramatic set pieces into some darker themed arenas with the help of some sense of timing. If only the rest of the film had some sort of foundational purpose to ground the humor into, then this might have been an ambitious and impactful film. As is though, it’s just a glimmer of what might have been with the right focus instead of whatever the hell we got.

The failure of The Midnight After is not purely aimed at Fruit Chan. The expectations that his earlier work established more or less cuts this film out at the knees. Truthfully, this film feels like a wreck, a series of WTF moments strung together with the loosest of Twilight Zone inspired threads that hopes the audience will enjoy it for its ambitious quirkiness rather than the quicksand that its foundations are built on. I will say this as I close out my review, if you are looking for something truly off the wall that challenges the rules and established structures of film making, feel free to dig into The Midnight After. It’s not out of the realm of possibility that it earns a cult following in the future for just being so out there and odd. For this reviewer though, it’s even hard to recommend it beyond curiosity.

Written By Matt Reifschneider
Posted by DarkReif at 11:56 AM