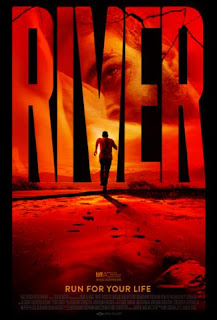 Thrillers, in this day and age, are rarely as pure as they used to be. They usually fringe on elements of action, horror, fantasy, or whatever genre they need to give the film a fresh feeling to stand out from the rest. This is because thrillers are one of the older and most utilized styles in cinema. It’s not that blending the thriller elements into another genre degrades a film, but that’s just how the genre has evolved over the last handful of decades. This is also what makes River feel so different from its thriller cohorts. It’s a film that certainly uses modern techniques in its approach to tap into the tension and energy of its concept, but it’s a film that remains largely pure in its focus. It’s not some big conspiracy film. It doesn’t throw in explosions and gun fights. It’s not based on supernatural lore. It’s a man on the run from a bad situation. Simple. It’s this simplicity that can both its highlight and its problems as a film.

Things are rough for John (Sutherland) as a doctor in Laos. He’s understaffed with no money and overworked. When he takes a small vacation to one of the local islands, things get worse. After a night of drinking, he stops a sexual assault. The events are blurry though and when he’s questioned for the death of another visitor to the island he panics. Now he’s on the run and unsure of where to go.

As I mentioned, River is something of a pure thriller. It plays things out in a very forward manner with almost everything in the film. It’s all about being in the moment with the character on the run and director/writer Jamie M. Dagg seems to really embrace this fact. He uses a bit of the handheld camera look and some shaky cam to give it that now modern and grounded style that is popular with thriller films, although he doesn’t use the flash editing which also benefits the sense of realism that River works with. This look aids the film as it partners with its unique setting in Southeast Asia that leaves the audience a bit unsettled as we follow John in his nightmarish decent. The performances from the entire cast also add to the realism. There are not a lot of flashy performances, again this film plays things straightforward, but the subtlety and dramatic beats do add some nice layers to a film that tends to move at an even pace throughout. River is not going to be horribly exciting at any time, this is not an action thriller, but the tension and atmosphere are strong to keep the audience interested in how things turn out.


The problem then, as with a good portion of thrillers, is that River can also be frustrating in its simplicity. As a character, John tends to make a lot of very silly and frustrating choices with little in the way of exposition or explanation why. This can, at times, make him seem more like an anti-hero in how flawed he is as a character and the film doesn’t quite have the gritty or darker elements to really sell that. It does allow the final ten minutes of the film to make a strong emotional statement, but that statement could have been even more impactful with some stronger character building in the narrative. The simplicity of the film also undermines some of the more interesting things that could have been said about the situation of a Caucasian doctor being on the run in a foreign country. He’s there to help as a doctor, but events take a turn for the worse. There is a minefield of various social, cultural, and political commentaries that are slightly touched on, but none of it is really explored in a more meaningful way. The story and narrative in River is so simple that it can actually be a detriment to the whole.

Still, there is something to be admired in the sheer purity of River’s intent. It’s still a potent thriller with enough tension and strong on-screen execution to be worthy of a viewing for those looking for it. The atmosphere is solid, the performances are great, and the concept is ambitious in its simplicity when more often than not the genre is playing to be the next big twist or gimmick. It doesn’t quite carry the emotional punch or commentary that it might have had to add in that extra layer, but it doesn’t necessarily degrade from the focus of the film. It’s not a thriller for everyone, but for those who enjoy subtlety and a straightforward demeanor, then River is a perfect way to get that.

Written By Matt Reifschneider
Posted by DarkReif at 10:26 PM