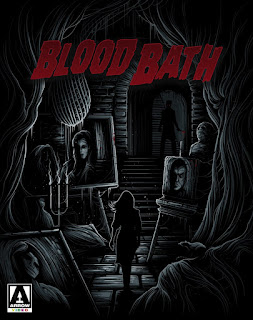 While the latest Arrow Video release Blood Bath isn’t necessarily for the usual flock of cult cinephiles that the distribution company aims for, it is a set that explores, in a way, one of the more interesting aspects of low budget cinema: reshoots, edits, and the Roger Corman way of low budget film making. Contained in this set are actually four (!) various versions of the “same” Roger Corman produced film in various versions with new scenes, cut scenes, and various states of presentation. In a way, this review may be one of the strangest ones I write for Blood Brothers considering the odd series of events and production pieces that went into the four different versions.  As a word of warning, I’ll do my best to keep this review short with overviews of the different versions and their comparisons instead of a full on exploration of each film on its own. Truthfully, the film isn’t really great enough to go into horrendous detail with a two page review of each cut, but it is one that cinephiles will find fascinating in its own regards no matter how good or bad they think the film is.

First up, it’s necessary to talk about the first two versions of the film that are on the first disc of the set. In essence, one can separate the film into two categories, the first being these first two versions called Operation Titian and its television edit Portrait in Terror. Both of these versions are more akin to classic crime thrillers of the time period using a fairly generic plot about stealing a priceless painting while adding in a melodramatic romantic triangle and a detective who wishes he was fishing instead of solving the mystery. Operation Titian most certainly owes a fair share of its tone and approach to the noir and spy films of the 50s with its rather twisty plot and melodramatic flair that’s powered by a handful of fun performances (including one from cult actor Patrick McGee) and a director who has a knack for the occasional entertaining shot. Unfortunately, the film drags in a lot of places and the budget restraints hurt the film’s attempts at a much more grandiose approach which leaves it feeling mediocre despite some slick ideas. The television cut, Portrait in Terror, tries to rectify this by essentially cutting most of the character stories and their relationships from the film. Most of the first act is chopped away to streamline the film and get to the thrills of the plot, but what it ultimately does is just sweep out a lot of the foundations. Portrait in Terror is a much quicker and pulpier film (more in line with what audiences wanted out of a TV movie, I’m sure) but it’s actually worse that the original cut due to its hollowed out story and un-relatable characters, not to mention its obvious padding out of time.

The second disc of the set focuses on the two other versions of this film called Blood Bath and Track of the Vampire. In these versions, directors Jack Hill and Stephanie Rothman went back and shot new footage to make the film into a vampire focused horror flick (although according to the special features, Hill’s original version did not have the vampires and only amounts to essentially half of what Blood Bath shows). Strangely enough, in Blood Bath, almost the entire film is new. There are only a handful of shots that remain from the previous films although it contains a few of the same story elements like William Campbell as the character Sordi whom is obsessed with paintings. The rest however is a completely different tone and feel from Operation Titian or Portrait in Terror. There is a fun and entertaining atmosphere of goofy humor and gothic horror to be leeched from it with just enough of Jack Hill’s thoughtful artistic element (a man tortured by the memories of a lost love) that power it through. The performances here are much more fun and light-hearted than the previous films and these two cuts feel like they are layered decently enough to hold their own as time passes. Perhaps the worst part is that Blood Bath runs a meager 62 minutes and the additional footage added into Track of the Vampire is so obviously padding of various killings that it actually seems like a lesser film overall.

Truthfully, this release of Blood Bath and its various former and latter versions is something of a cinephile dream as a way to showcase some of the unusual elements of how a film is made, re-made, re-edited, and padded into new pieces of cinema. While none of the films are ones that are worth a purchase alone as mediocre or substandard films, watching all four together and comparing them becomes something of a fun exercise. As a huge bonus, Blood Bath also includes an 80-minute visual essay from the phenomenal Tim Lucas that delves into the history and variations of the films that any cult cinephile will want to experience. If anything, while the films including in this set may leave a lot to be desired, the culmination of them is much greater as a whole and a lot more fun to be analyzed.

*Note: After the Arrow Features list I have added ratings for all of the various cuts of each film, but just keep in mind that this box set is much more awesome than those ratings will ever explain and Tim Lucas' visual essay gets a perfect score for its in depth and entertaining analysis.

TRACK OF THE VAMPIRE

Written By Matt Reifschneider
Posted by DarkReif at 11:35 PM