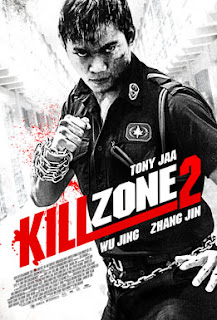 The original Killzone (also known as SPL outside of its US release) is a film that only gets better with time. My original viewing was good, but the repeated viewings since then have proven that the Wilson Yip directed action thriller is a layered, complex, and robust film worthy of the mass praise it receives. When it was announced that it would receive a sequel, titled SPL II: A Time for Consequences overseas and Killzone 2 for the US, it was a bit odd. Particularly because it would star two people of the original film as new characters and have no connections to its predecessor. Truly, this is a film that is sequel in spirit and theme only. It’s also a sequel that matches the same kind of thoughtful, action packed layering that Killzone utilized and brings the series into a new and modern light. Once again, it’s a film that also seems to strengthen with repeated viewings and my latest one seems to be the best one for me yet.

Kit (Wu Jing) is in bit of trouble. He has been working as an undercover cop to get the heart of a underground crime organization that has been kidnapping and killing people for their organs to use on the black market. His cover is blown though and he’s on his way to a corrupt Thai prison run by a ruthless warden (Max Zhang). There he meets a Thai guard Chai (Tony Jaa) who is desperate to help his sick daughter. The two will have to navigate a corrupt and complicated system to take down its head (Louis Koo) if they are going to find a way out.

One of the reasons that the Killzone series has been so effective is that they are not only great at action, but they are ridiculously smart and well thought out films. Granted, the action in Killzone 2 is spectacular, more on that in a moment, but it’s built on a dramatic and every emotionally impactful foundation that’s worthy for the series. The film divides most of its time between two leads, played with career defining performances from both Wu Jing and Tony Jaa, and it builds the two separate stories – one about a man losing himself undercover and the other about a worried father trying to make the right decisions for his sick daughter – into each other with a fluid and graceful hand. The narrative flow as it jumps between the two (and occasionally into flash back) works with an almost surgical like precision. It establishes a robust character set with ease, gives them all enough depth to keep the audience caring, and then brings them together in the most effective ways. Max Zhang, as the film’s henchman villain, and Unda Kunteera Yhordchanng as Chai’s daughter both steal their scenes in impressive ways too considering the talent they have around them. I might have teared up a little when Wu Jing’s Kit meets Chai’s daughter for the first time and it’s this kind of heart and emotional relevance that makes this movie so exceptionally effective as a story telling device. The performances are heartfelt and the way that the writers and director make it all come together allows it to fly.

This kind of beating heart underneath the cops and crooks classic Hong Kong plot gives Killzone 2 an amazing foundation to build the rest of the movie on and it ably does just that. From there, director Pou-Soi Cheang builds the film as an almost perfect action extravaganza. The action, which covers an airport shootout, a prison riot, and hand to hand martial arts combat, is spectacularly done. No flash editing. No shaky cam. This is a film that wants to show you the heights of modern action in all of its glory. The prison riot, with its super long takes, is impeccably filmed and the 2 on 1 fight of Tony Jaa, Wu Jing, and Max Zhang in the finale might be one of the best modern martial arts displays put on celluloid. Truly, Killzone 2 features the best action you are going to see this year and if you are an action fan you owe it to yourself to see what this film has to offer.

There are only a few nitpicky things that prevent this from being a perfect score, including an odd narrative shift in the last couple of minutes, but Killzone 2 is one of those films that is only going to get better with repeated viewings as one is able to digest and tease out the strong writing, performances, and direction that this film has to offer outside of its phenomenal action set pieces. The film is not only one of the most exciting action films of the last ten years, matching what Killzone had to offer, but it hits home with such an emotional and narrative punch that it’s going to be a film that lasts decades down the road as a great film, not just a great action film. This is a mighty fine accomplishment, particularly in light of the spectacle driven Chinese film focus, and it comes with our highest of recommendations.