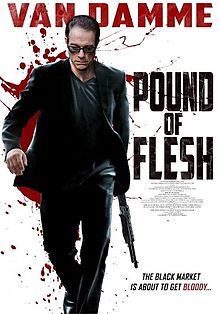 At some point, a film about Jean-Claude Van Damme going out to find his kidney in South Eastern Asia garnered some big expectations. Perhaps it was the inclusion of villain badass Darren Shahlavi. Perhaps it’s because the film is directed by vulgar auteur champion Ernie Barbarash. Perhaps it’s because it has fight choreography by John Salvitti. Very quickly, this movie was racking up ‘cult points.’ Doesn’t matter though, because in the end, Pound of Flesh is disappointing in many regards. The film gathers some momentum going into the second half, thanks mostly to a few emotionally charged moments, but by then it’s still been a rocky ride that never even comes close to be as awesome as the above mentioned attributes should have made the film. Thusly, in a word, it’s disappointing.

Deacon (Van Damme) has never been all that reliable in life outside of his job—a job that really boils down to him walking into places and killing the shit out of everyone inside. When he makes his way to Asia to give his kidney to his niece, who requires it immediately, he is surely going to do one thing right. Unfortunately, he finds himself a target for the ultimate urban myth: waking up in a bathtub full of ice with one kidney gone. With the help of his teacher brother (Ralston), a prostitute (Peters), and an old “business” friend (Aleong), Deacon is going to get his kidney back. And the price is going to be a lot of lives.

At its core, Pound of Flesh is such a silly concept that it almost had to fail. The entire quest for a stolen kidney is based on some well-worn concepts within the low-budget action genre (let’s beat our way through hoodlums to find our bad guy!), but it just seemed ripe for B/C-grade action clichés from the start. Unfortunately, Pound of Flesh rarely rises above many of its stereotypical plot progressions. There are a few moments of inspired emotional punch, including a rather heartfelt monologue from Van Damme about past mistakes that showcase just how far he has come as an actor from Kickboxer and the finale tugs a bit on the heartstrings more than it should have, but most of the rest of the film is a humdrum affair of random red herrings, generic action beat downs, and Van Damme finding ways to not take off his shaded glasses. We get plenty of brotherly love/hate, some terrible dialogue, and the random inclusion of a prostitute-turned-Van Damme disciple that rarely makes sense, so just run with it, because it’s not going to throw you a curve ball.


Honestly though, this is a straight to home video action flick featuring Van Damme as an organ-missing angel of vengeance, so the clichés and poorly navigated plot progressions are par for the course. It’s the fact that Pound of Flesh fails to even wholly entertain that is most concerning. Ernie Barbarash, who made the generic thriller 6 Bullets with Van Damme a decent watch and also made a fun little actioner with Michael Jai White last year, seems to do some very random things with this film. Firstly, the first big action set piece (when Van Damme goes to a night club with a Bible looking to beat some thugs) is horrendously green screened. Why? Fuck knows. This happens randomly throughout the movie too. There are some of the worst green screen shots I have seen in a long time and that says a lot in itself. Pound of Flesh also tends to be oddly edited, Van Damme’s stunt double is quite obvious at times, and the film’s focus on being taken seriously undermines a lot of the better B-grade aspects it should have utilized to maximum entertainment value. Barbarash usually takes poor scripts and elevates them with decent execution, but Pound of Flesh might be one of his worst.

It’s not that Pound of Flesh as a film is entirely bad. Van Damme delivers one of his better performances despite the dialogue and plot, the fight work is decent even if a little too brief for my liking, and Shahlavi (RIP) steals every scene he’s in as the only guy that seems to be having fun in the movie, even if he is only the henchman. It’s just that with all of those things combined, this film could have arisen as the little actioner that could to be a cult classic built on solid pieces. As is though, the execution is uneven, the story is wishy-washy, and the focus of the film never seems to be in the right mindset. Perhaps it was the oddly high expectations I had going in, but Pound of Flesh is simply disappointing.

NOTE: It’s sad that this is one of the last films that Shahlavi finished before his untimely passing. He truly was a screen presence full of heart, charm, and larger than life character. It’s great that he was one of the few truly inspired elements of this film. He will surely be missed by all action fans around the world. Rest in peace, Darren Shahlavi. Your scene stealing moments will live on forever.