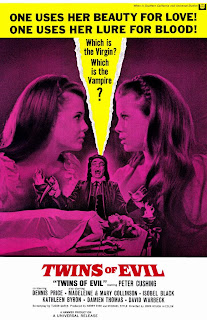 After years upon years of obscurity in the United States, Hammer’s third and final film into their Karnstein trilogy finally gets unleashed onto DVD and Blu-ray thanks to Synapse films. In an ironic twist the first two films in the series, “The Vampire Lovers” and “Lust for a Vampire”, are now out-of-print and have become obscure in themselves.  But I digress; the real question is was “Twins of Evil” worth the wait for young and new fans of Hammer Horror to finally lay their eyes upon. I’m happy to give an enthusiastic YES as not only is Synpase's release fantastic, but I also found the film to be the strongest in the Karnstein Trilogy and one of the most overlooked gems in all of Hammer’s extensive catalog. 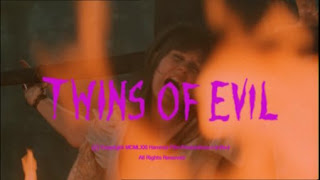 The story is in actuality a prequel to the previous two films, taking place before the sexy Carmella started making rounds by sucking the life out of rich young women in controversial Lesbian scenes. In this film we are introduced to the Karnstein family and how they became vampires by worshipping Satan. Knocking at their door is Peter Cushing (playing a different character than the general he played in “The Vampire Lovers”), the head of a vampire lynch mob called “The Brotherhood” eager to burn any nimble vampire they come across. Things get complicated when his two beautiful nieces come to visit and our head of the Karnstein family want to make the gorgeous duo his dark brides.
The writers here seem to throw tons of material into the mix and somehow it all gels together with the vampire and witchfinding plots complementing each other perfectly. New comer director John Hough seems right at home in Hammer proving he had what it took to make a gorgeous looking gothic horror film with ample amounts of gore and sexuality for a an early 70s release.
The real winner of the film for me is Peter Cushing, who gives perhaps his best performance of his career. “Twins of Evil” marked the first film following his return after his wife’s tragic death and this anger and pain fueled his performance making his character, who is essentially a protagonist of the film, almost as sadistic and indiscernible as the villainous bloodsucker himself.
The film can be criticized being even further removed from the Carmella novella source material and for having a heavy focus on heaving bosoms as many of Hammer films from the early 70’s are but that just adds to the enjoyment (at least for a majority of the male audience) and giving the audience something different and refreshing. The gorgeous film-making and strong acting makes this entry a winner and not only my personal favorite of the Karnstein trilogy but also one from Hammer’s impressive vault of films. Though this marks the end of the trilogy, some members of the Karnstein family would pop up in Hammer's "Captain Kronos: Vampire Hunter" essentially making that film a pseudo spin-off.