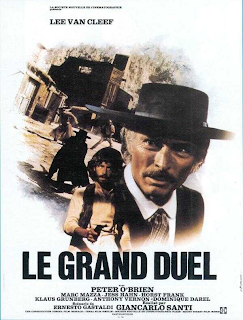 AKA "The Big Showdown", "Storm Rider"


Even towards the end of Lee Van Cleef’s career in the Spaghetti Western field he still was able to pump out strong entries in the genre. Though films of his like the Shaw Brothers co-production “Blood Money” and the American co-production “Take a Hard Ride” are easily written off by fans and audiences for incorporating outside influences like martial arts and blaxploitation into the Spaghetti Western mix, it’s not so easy to write off “Grand Duel” as this is a straight forward solid spaghetti western guaranteed to please fans of the late, great LVC.

Cleef plays a shunned sheriff, fired from his job for speaking his mind at a trial in which the judge was bought and paid for. Not content on walking away with his tail between his legs, he sets out to find the wrongly convicted man and prove his innocence and taking down the corrupt family behind the cover-up.
"The Grand Duel” is director  Giancarlo Santi’s first film but one would never know as it is marvelously directed and paced with skill and a keen eye for action and style. Why this guy only directed a handful of films is beyond me as he proves with "Grand Duel" he had what it took to be a solid director in any genre, especially the Spaghetti Western thanks again to Sergio Leone for teaching him the way of filmmaking by allowing him to serve as assistant director on both “The Good, the Bad and the Ugly” and “Once Upon a Time in the West.”
The aging and more scraggly looking Lee Van Cleef is badass as ever though his character is hardly a stretch for him as it is essentially of copy of most other characters he played in previous, better known genre entries. Cleef is a lot like Charles Bronson in that sense playing the same tough guy that people have grown to love and rarely breaking out of the mold. However, if you like all those other characters he played then you are going to love “Grand Duel."
"The Grand Duel” may not transcend Cleef’s Leone films or the entries in the LVC holy trinity ("The Big Gundown", "Day of Anger" and "Death Rides a Horse"), but it still a solid, well made spaghetti western in its own right that is sure to please Cleef and genre fans alike. The film has sadly fallen into public domain and many different versions are available on the market including a recent Blu-ray release from Mill Creek Entertainment. The picture quality looks good but the audio track is screwed up and isn’t synced up with the film. A person’s best bet is the double feature release from Wild East packaged with another Cleef feature titled “Beyond the Law”. Sadly this version is long out-of-print and very difficult to find.