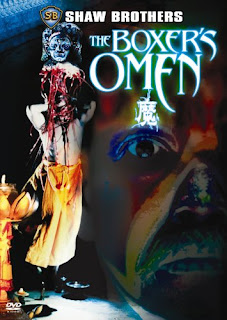 
Deciding to broaden my Shaw Brothers collection, I decided to purchase of few of their horror productions as opposed to their numerous period kung fu epics. Thoroughly enjoying their “Black Magic” series I was eagerly awaiting viewing “The Boxer’s Omen” as it had the reputation of being even crazier and more bizarre than all their other horror productions balled together. Well it does live up to that reputation but those descriptions don’t always prove to be a better movie as shown with this absolute mess of a film. 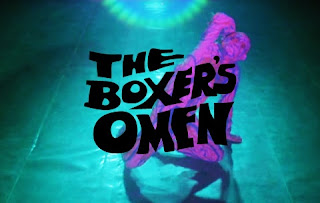 As with many other Shaw Brothers productions, I was oblivious to the fact that “The Boxer’s Omen” was a sequel before I purchased it. It is actually a follow-up to a film called “Bewitched” (which hasn’t been given a stateside release) which documented the account of a Shaolin Monk taking on an evil black magic sorcerer. It is touched upon in this film in a memorable flashback sequence but the film is easily viewed on its own.
The plot itself is an absolute mess of bizarre images and plot devices that vaguely tie together and make little to no sense. The basic plot has a kickboxer whose brother is paralyzed by a sadistic opponent. He promises his brother vengeance but his life gets complicated when he is visited by the apparition of a dead monk. Apparently he was a brother of the monk in a past life so he travels out of the country to visit his talking corpse (yes it’s as strange as it sounds) in order to train to defeat an evil black magician that could destroy his chances at beating his kickboxing opponent. That’s about as much as I could gather from its insane storyline.
Fans of outrageous scenes that will dazzle the senses will get an eye full as just about every bizarre aspect of every other black magic Asian horror film is upped ten-fold. We get flying magician heads strangling people with tendons, Fuzzy stuffed animal looking spiders piercing eyes (ala Lucio Fulci’s “The Beyond”), corpses raised from the dead in alligator carcass, attacking alligator skulls, bat crucifixions, bat skeletal dances, brain stirring in a skull and talking mummified corpses. Does any of this make sense? Nope but it would be more entertaining if the special effects weren’t so lamentable causing more unintentional laughter than shock value.
“The Boxer’s Omen” may dazzle the senses with all its bizarre imagery but the film as a whole is a failure with its incomprehensible plot, pilfered music from “Alien”, “Invasion of the Body Snatchers” and “Phantasm” awkwardly placed throughout and shoddy special effects that induce laughter. Basically it’s entertaining for all the wrong reasons a horror film should be for. It’s worth a look for fans of the bizarre but cult fanatics are better off hunting down the Indonesian horror film “Mystics in Bali” for a more fun wild ride down Asian Black Magic lane.