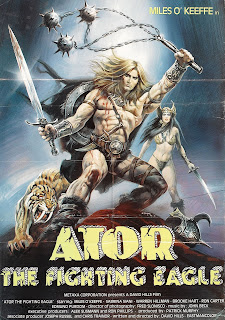 AKA "Ator the Invincible", "Ator"

Let me tell you the days of high adventure!  back in 1982 a little sword and sorcery flick called "Conan the Barbarian" opened the flood gates of imitators from all over the world. If you are familiar with cult films and cheap cash-ins then you should know that Italy is the king of imitators and none more blatant of a knock-off than the Joe D'Amato's "Ator the Fighting Eagle", which copies it's American counterpart so closely that it is derogatorily referred to film lovers as "Italian Conan". 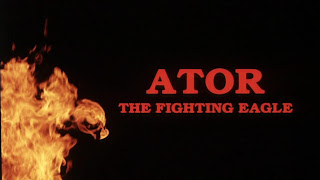 After having his parents slaughtered, a small baby survives and is given to a peasant family to raise by a warrior to as the child is prophesized to defeat the sadistic and iron fisted ruler known as the "Spider King". When the boy grows to manhood, the day of his wedding to his sister (don't ask!) gets interrupted by the Spider King's warriors who kidnap his bride. Now Ator must rescue is sister.. err... wife and defeat the Spider King while completing little side quests along the way.
Being knick-named "Italian Conan" it is safe to assume there are many parallels one can draw between the two films... and there is. Our hero Ator teams up with a sexy blond thief, gets seduced by a witch and his main quest is to rescue a young woman from a cult leader that worships spiders as opposed to snakes. Hell the Spider King is even dubbed by a James Earl Jones sound-a-like! Even with all the blatantly stolen plot points, Ator still has some differences. First is the underdeveloped character of Ator, who is rather naive child compared to the brutal raising of Conan. He is not a thief or a gladiator... he's just a simple peasant trying to rescue his wife that just happens to be his sister... again don't ask. His sidekick is replaced by a bear cub and there are plenty of new side quests in which Ator must battle blind warriors, amazons and even reclaim a magical mirror shield.
Like most cheap foreign knock-offs, what hurts the film most is the miniscule budget which affects every aspect of the film. The special effects are deplorable (including a giant spider complete with visible strings lifting it's legs), the costume designs are downright laughable (Miles O'Keeffe and Edmund Purdom sport the fakest wigs this side of Jamie Lee Curtis in "Halloween II") and the cinematography is none existent. Don't get me started on Joe D'Amato's lack of directing (hiding under the pseudonym David Hills) as he proves again with "Ator the Fighting Eagle" that he defines the word 'hack'.
"Ator the Fighting Eagle" is not surprisingly an awful "Conan" rip-off but like most Italian imitators it entertains due to unintentional laughter.  The un-special effects, dialogue and even the James Bond "For Your Eyes Only" sound-alike song playing over the end credits are sure to get a chuckle out of any B-movie connoisseur. In an amazing turn "Ator" did well enough to inspire even more sequels than the character that 'inspired' it with a total of three: "The Blade Master", "Iron Warrior" and "The Quest for the Might Sword" all of which are far worse than the original which may not seem possible.


Want to see "Ator The Fighting Eagle?" Purchase from the link below!
Posted by Cronosmantas
Email ThisBlogThis!Share to TwitterShare to FacebookShare to Pinterest
Labels: Action / Adventure, Sword / Sorcery