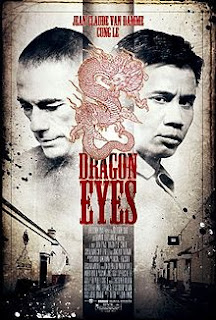 The cast is stellar with both new and old school elements. It's got a classic action director. The hype is set. It's inclusion as one of the After Dark Action films gives it a little street cred. It won a few awards at Actionfest last year. "Dragon Eyes" should be one of the foundational stones in this second golden age of action films. Yet throughout its run time despite some very valid attempts at being artistic, this rather by the numbers action/crime piece simply misses the target on damn near every level. It killed me when the credits started rolling and I was left completely unfulfilled both as a B-grade action fan and as a fan of artistic film making. I want to love "Dragon Eyes," but the film does its best to make sure that it doesn't happen.

St. Jude is a place where the thugs and corruption run so thick, its hard to see anything else. Rival gangs battle it out for drug sales and the violence of the street has become a norm of everyday life. Hong (Cung Le) looks to change that. His eyes are set for his goal: to clean up the streets of St. Jude by any means possible even if it means using his fighting skills his crafted while behind bars under the training of Tiano (Van Damme). This does mean that he will have to come head to head with the force behind the corruption...a ruthless and sinister Mr. V (Weller).

I knew going into "Dragon Eyes" that its main selling point, a Mr. JCVD, was essentially a glorified cameo appearance. Of which, it most certainly is and his time on screen is well spent except for a rather drawn out flash back sequence where it shows how his character ended up in prison. What I was surprised with in the film though was how well the quiet and determined Cung Le carried the film. Although I have seen him in various other films (the horrid "Tekken" and the solid enough "Bodyguards And Assassins") he was able to showcase enough charisma and acting ability to really push through the film. In all honesty, Cung Le is easily the highlight of this film.

...which leaves the rest of the film. Although far be it for me to criticize a film that has retread over territory done before in its script, in "Dragon Eyes" the by-the-numbers plot and half thought out characters are atrociously dry and two dimensional. If it wasn't for Cung Le's charm (and to some extent the swagger of villain Peter Weller) this film would have been boring in its plot. In-between action sequences the film simply drags on. The romantic subplot is missed if you blink, the connections to Tiano seem a bit randomly forced into the film on some sort of weird artistic merit, and every character is underdeveloped. The only real thing I felt the film had going for it plot wise was Hong's reoccurring regret over the death of a woman that seems to have a cliche but well timed twist. Beyond that it's the same old same old "stranger shows up to clean up the streets" kind of film.

Which leads me to the actual action sequences. In real life, Cung Le has shown he's a beast and for the most part the film certainly shows off his powerful fighting techniques nicely. The opening fight highlights the film though as he throws down with some thugs over his car. That works for me. Then the finale shows up. A big fight between the hero and a monstrous Russian drug runner has been building along with Hong's eventual collaboration with the other two gang leaders. It really builds to this potentially epic finale! POTENTIALLY. It never goes there. The film seems to drop off here, killing random people without much closure, ending on a rather lackluster fist fight, and then the credits sort of pop up out of the blue. What the hell happened here?

As you can tell, my experience with "Dragon Eyes" was more than lack luster. A few strong fights and a charismatic lead simply couldn't save the film from its vicious cliche usage and horrible attempts at being artistic with the script and directing. Perhaps the biggest disappointment for me in 2012 considering all the hype I had going into the film. It's one that might be worth the rental or purchase later, but there are far better action films in rotation now that deserve your time.