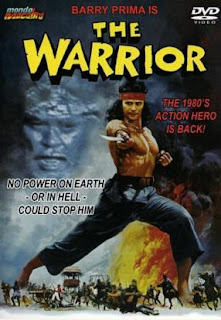 Indonesia is quickly becoming one of my favorite countries for cult entertainment as some of the most quirky and eclectic films I've ever seen have come from their shores. Up until now all of my viewings have been of films in the horror genre and after seeing "The Warrior", one of the country's most popular martial arts films, I can honestly say that their action exports are just was weird and entertaining as their horror movies.

The 'warrior' of the title is Jaka Sembung (Barry Prima), an Indonesian Robin Hood clone that uses his martial arts and mystical skills to try to defeat the sadistic Dutch invaders. In order to try to bring Jaka to justice, the Dutch resurrect a warlock to turn Jaka into a pig (?!) but even that's not enough to stop him!
What I love about the film is that it lovingly combines martial arts with mystical black magic mythology to make a weird amalgamation of fantasy and action. Director Sisworo Gautama Putra also pulls no punches when it comes to gore graphically showing  but not limited to eye gouging and torso's being ripped in half. The goofy special effects mixed with odd dubbing just adds to the silly fun.
The film introduces Barry Prima into the lead role allowing him to become one of the biggest stars in his home country (though I imagine not many of heard of him in America). I will be honest in saying his acting is rather stiff but one doesn't watch films of this nature for acting ability. Where Barry Prima shines is in his martial arts ability as he seems to be loving kicking ass of off these Dutch bastards with bad facial hair.
"The Warrior" may not be the craziest film I've seen from Indonesia, but this is still an understatement as this is a truly bizarre in its own right. It still ranks as the most weird Martial Arts movie I have ever seen thanks to is strange mixture of genres, silly special effects and crazy conclusion. I can honestly say it was a hell-of-a good time and proved to be very profitable it's home country and was followed by three sequels, sequels I desperately want to see but unfortunately have never been released in the United States. Please Mondo Macbro, I'm begging you to unleash these sequels state-side!

Want to see "The Warrior?" Purchase from the link below!
Posted by Cronosmantas
Email ThisBlogThis!Share to TwitterShare to FacebookShare to Pinterest
Labels: Action / Adventure, Exploitation, Fantasy, Martial Arts