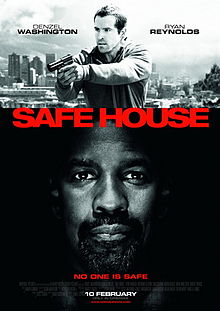 The problem with these mainstream thrillers is this: the concept is easy to sell to audiences, but its damn hard to perfect as an artistic or refreshing endeavor. This is mostly due to the fact that there are a lot of thrillers made every year, but without clever intuition from filmmakers or a really good plot twist...most of them just get bundled together and forgotten within a couple of years. Despite some great things about "Safe House" this is one of those films where I enjoyed it while watching, but I foresee myself never touching it again because it wasn't quite 'top of the line.' A film that thriller fans will love to watch for some great performances and non-stop pacing, but ultimately doesn't make it to the top percentile of the genre.

Matt Weston (Reynolds) has somewhat of a shit job for the CIA for too long. He's the house keeper of a safe house in South Africa and has yet to find a guest to let him prove himself. That is until Tobin Frost (Washington) decides to let himself get caught. Now Weston is caught between the viciously smart ex-CIA rogue and those looking to kill him. The race is on and Weston is beginning to question just who he can trust in his superiors to make sure his guest stays in custody.

Perhaps the main charges for seeing this film are the actors involved. Anytime you have Denzel Washington playing a villain (or anything for that matter), then a movie should have your attention immediately. Honestly, it was worth the watch just for him. He owns the role of Frost in all of its asshole complexities with vigor and a screen presence he brings to everything. Even though he shares a lot of screen time with Ryan Reynolds, he easily becomes the main reason for keeping up with the film's often vague and forced plot progressions. That being said, I was also shocked with Reynolds performance. We've seen him do gold ("Buried") and we've seen him in garbage ("Green Lantern") just in the last handful of years, but the former actor is the one that shows up for "Safe House." When matched against a titan like Denzel, one has to simply keep up and Reynolds does just that - adding in enough emotional attachment to get us involved without overdoing it with his quirky humor and pretty boy attributes. A strong and surprising performance for sure from both parties.

Beyond that, "Safe House" runs a rather by the numbers spy thriller. The plot is expectedly high energy with plenty of octane driven action set pieces that range from act and mouse chases, to car chases, to gun toting chases (okay, there is a lot of chasing in this movie), and a fairly solid amount of good fist to cuffs. This latter element was a pleasant surprise in its solidity and a bonus for this reviewer. Unfortunately, the director has a real sweet spot from desperately imitating Michael Mann with gritty visuals and relentless shaky cam/quick edits for that in the moment style. The style does tend to ruin a lot of great tension particularly when it comes to the character build within said sequences. I know that the look is very popular now though, so I had that expectation going into the film so it didn't completely drown the film in forced modernity.

All in all, "Safe House" is a nice gritty high end thriller that took some pleasant surprises with its execution including a few good hand to hand combat sequences that really caught me off guard. Although I wouldn't go as far as to say it's one of the best thrillers I've seen, it's strong pacing and performances take the viewer on a ride that quenches any action/thriller thirst one might have developed between films.