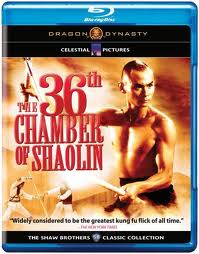 To say that there is a separate world for martial arts film fans is truth. To say that there is another separate world within that world for Shaw Brothers fans is also truth. Both groups are fairly die hard and often enough quite spirited in what they have to say about their love for these films. So to say that "The 36th Chamber Of Shaolin" is highly regarded as one of the best kung fu films of all time by both critics and fans is a feat. A feat that, upon viewing of this classic Shaw Brothers film, is as true as the extremity of claims for it. Indeed, Kar Lau Leung's tale of justice brought to town by one of shaolin's greatest monks is a stunner. It's quick to its feet with strong characters and a classic plot and the execution is top of the line.

San Te (Gordon Liu) was well on his way through his studies when Tartar invaders descended upon his defenseless village looking to crush any rebellion towards their tyrannical rule. Despite his attempts to support the local rebellion, the Tartars lead by a ruthless leader (Lo Lieh) crush them and murder the conspirators. San Te is forced to flee for his life when he takes refuge in a shaolin monastery. There he learns the values of leadership and must under go a grueling training course in kung fu so that he may return home and restore justice.

Although "The 36th Chamber Of Shaolin" rarely deviates from a tried and true formula for Shaw Brothers kung fu films, it's the strong execution from all parties that really makes this film kick. Gordon Liu simply owns the role of San Te as he is forced to endure Lau Kar-Leung's staple training sequences and moves from that of a naive pawn to a force of justice to be reckoned with. It's a subtle role and one that certainly relies on the direction of Lau Kar-Leung to work, but its comes off as one of the more memorable heroes of the Shaw era.

This lead, and many of secondary roles, are strengthened by meaningful and brilliant fight/training sequences. While many Shaw productions just randomly throw in fights for the sake of it, "36th Chamber" relies on plot sensitive uses of kung fu and training to work. Even something as simple as men running on small logs in a pool of water become riveting feats of character development while the few true fight sequences easily fit into the plot progressions as both necessary to move the film forward and fascinating works of choreographed awesomeness. Lau Kar-Leung knows how to make on tired just from watching his films and he does so with effective storytelling here from its opening and brutal street fight all the way down to the quiet one on one face off between the hero and villain.

"The 36th Chamber Of Shaolin" is a classic to re-define classics of a kung fu age gone by. It's well written with its political undertones about justice and teaching those in need to defend themselves, while at the same time its an expertly crafted storytelling and entertaining martial arts machine...one of the best that the Shaw Brothers ever produced.