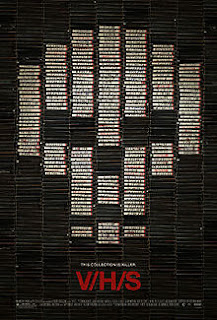 Found footage horror films are a dime a dozen right now. Anthology flicks seem to be garnering some heft once again too. "V/H/S" is the first, as far as I know, to really combine the two and after a pretty strong showing throughout the festival circuit, my curiosity for how these film makers pulled it off became almost over bearing. The positive comments streamed in about how scary and intriguing it was, so it was only natural that it would leap its way up the Blood Brothers viewing queue. Even though "V/H/S" is far from a perfect film, the general way that it goes about throwing together its concept is impressive overall.

A group of young men, of the hoodlum variety, have been given a very special job. A simply one. They have to break into a house while the owner is asleep and steal one VHS tape. Just one and they'll know it when they see it. Two problems though when they arrive. Firstly, the owner is dead in a chair surrounded by the glow of static televisions. Secondly, there are dozens of VHS tapes scattered about. So the men, decide they need to watch a few to figure out which one is the right one...

The cynic in my had my doubts for "V/H/S". Even with ever awesome Ti West attached as one of the directors to the film, the idea of a found footage anthology flick just didn't quite sit well with me. The saving grace of this little film is the broad spectrum of genres it touches on. Each film is pretty unique and distinct with its genre and it helps the overall enjoyablitiy of the film. Love monster films? There's one. How about haunted houses? Got one of those too. Slashers, psychological horror, even a science fiction toned one. Even if the style of the film of a rather similar tone (not a whole lot of new ground to cover with found footage at this point), the broad strokes of the stories definitely highlights "V/H/S."

That being said, some of the execution of these tales are hit or miss. The threaded angle of the hoodlums watching the tapes is subtly creepy (keep an eye on the background elements...) and most of the actual short films are impressive on at least a few levels. "V/H/S" starts and ends with the highlights, that being our monster film to kick it off which has some great gore effects and a killer twist ending and the haunted house/satanic film that bombards the viewer with all kinds of crazy thing, and in between we get the other tales which are hit and miss ones. The writing is rather simple and relies heavily that the audience picks up on the small details which works to its benefit (the creepy if not somewhat forced slasher entry) and also to a fault (the confusing 'couple on a trip' entry that doesn't explain enough). Overall the acting and direction is pretty strong with a few stand out moments like the panic in the first monster tape and "V/H/S" utilizes its low budget and style to some solid enough surprises.

With the acclaim that was pouring in for "V/H/S" I had some high standards even with my own cynicism that it could pull it off. The mixture of styles certainly impressed and how the film really ties it all together worked like a charm for me. The execution on some of the stories was of top quality while the others were a bit mixed. All in all, I enjoyed the hell out of this found footage anthology horror but it is rather flawed in some of its tales. Highly recommended for horror fans though as it is a very unique experience.