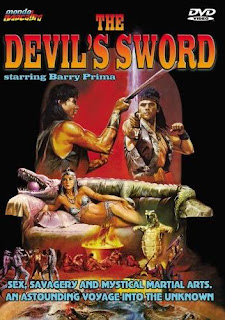 Following “The Warrior”, Indonesian star Barry Prima became a heroic action star in his home country and Rapi Films wasn’t going to just waste his talent and struck when the iron was hot. They loaded up his schedule with numerous, quickly made but endlessly entertaining exploitation actions films and out of this flood “The Devil’s Sword” became one of the most popular due to its bizarre combination of both the Martial Arts and Sword and Sorcery genres.

In a far away land the sadistic crocodile queen demands a small coastal village to sacrifice their young males to her in order to quench her insatiable need for physical love. A nearby warrior gets wind of this and decides to go on a quest for the mighty ‘devil’s sword’ to aid in defeating the bitch. It ain’t going to be easy though as he has to fight his way through crocodile men, witches, paper mache monsters and even an old nemesis.
“The Warrior” was a crazy film but not even half as insane as “The Devil’s Sword”. This film is like “Conan the Barbarian” on an acid trip as the filmmakers throw everything imaginable into the mix to see what sticks. Not all of it works thanks to weak special effects and a uneven pace, but a large portion of the film does in the favor of being a trashy delight. Highlights include our hero with supernatural powers flying on rocks to crush invaders and slicing and dicing up men in bad crocodile costumes. Hell even the flying guillotine made popular in the Shaw Brothers duology makes a bloody (literally) appearance.
Barry Prima is wooden as ever in the lead role, but he still has a small charismatic charm about him and his martial arts abilities are about as good as they get, for Indonesia that is. All the craziness and graphic gore in the plot is more than enough to cover-up his acting ability, or lack-there-of.
“The Devil’s Sword” is one of the craziest most outlandish films I have ever seen, even more so than “The Warrior”. If you have soft spot for Indonesian exploitation cinema or films that are just a wild ride for the senses then “The Devil’s Sword” is definitely worth picking up for your collection. Unlike “The Warrior”, “The Devil’s Sword” was never followed by a sequel which is just a damn shame.