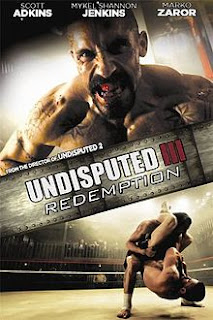 While everyone else toils away with watching the 2012 Summer Olympics, I felt it was only fitting to watch some good solid competition too. In true Blood Brothers style, "Undisputed III: Redemption" takes us into the world of international underground illegal prison fighting. This time around though, we are treated to the redemption plight of "Undisputed II" villain Yuri Boyka as he overcomes his defeat and broken knee at the end of the last film to fight for his freedom in said corrupt tournament. Although the film is undeniably cheesy and poorly written with silly characters, it also has the benefit of a few things. Namely modern action hero Scott Adkins and some seriously amazing fight sequences. As with its predecessor, its a massively fun romp of B-grade action awesomeness that deserves to be seen.

After his wrenching defeat to Chambers, Boyka (Adkins) has humbled himself to becoming the prison janitor unable to accept his fall from grace. When the chance to fight in an international underground illegal prison tournament comes to his attention and to that of the prison's warden (Ivanir), he decides to retrain himself and kick his ass into gear to win his freedom. Can he humble himself enough to become the warrior he once was or will a corrupt system have him broken before he can even taste his freedom?

What kind of B-grade action film takes the charming screen presence of Adkins and throws him into a non-stop fight filled prison fighting film? A freaking awesome one, that's what. Boyka was a fantastic villain for "Undisputed II", but he might be an even better anti-hero for this third entry. Adkins in all of his ripped martial arts infused glory highlights this third entry with a charming, heartfelt, and quiet hero we can really dig into. Not only that, but the supporting cast is much better than we've see in this franchise before. Our hero befriends the arrogant Turbo for a great duel banter for the film and one of the better "buddy" moments I've seen in a long time. Although the plot is cheesy as hell with outrageous twists and silly moments (including most of the training in the beginning with Adkins in horrible wigs and beards), its hard not to get sucked into the the ridiculousness of the film and enjoy every minute.

And once again director Florentine, who in his own right has become something of a B-action film directing superstar, and his fight coordinators come up with some seriously stylistic fights. This time you get to see a wide variety of styles as the fighters are from all over the world and it really takes the fighting to the next level. Seeing Adkins and his wickedly powerful martial arts take on a variety of styles is very cool and worth it just for any martial arts fan looking for some modern style to the mix. Even though "Undisputed III" lacks as strong of a villain as the previous two entries, it still ranks as one of my favorite films for modern fight work.

"Undisputed III" might be really cheesy with poor dialogue and relatively by the numbers character development, but the combination of Adkins as a humbled Boyka and the stellar fight work make up for a lot of the films flaws. It does have some great emotional moments too (its hard not to have a massive smile smeared across your face by the end of the film) even if getting there is a bit tough for those looking for a bit more of an invested pay off. Definitely a highlight of B-action films and highly recommended! I sincerely hope for a fourth installment...perhaps with a three way ass kicking between Michael Jai White, Scott Adkins, and Mykel Jenkins?

Want to see "Undisputed III"? You can purchase from the link below or pick up the previous film!