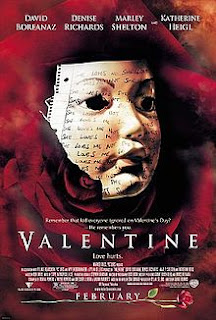 Even by 2001 the revival slasher genre was growing thin and stale. "Scream" might have kick started the classic horror genre, but its repetitiveness and functionality to generate scares never really modernized past the self realizing Wes Craven vehicle and by the time it got to a film like "Valentine", it was like beating a dead horse to death again. Yet, somehow, that IS the appeal of the slasher genre to many and upon repeated requests I took "Valentine" into my home and gave it a fair chance. Although it isn't anything original and it suffers from so many cliches that it might buckle under the weight, I have to admit that I had a fun time watching the damn thing. I won't admit that to many people (just you oh faithful Blood Brethren that read here), but the ridiculousness of its concept and silliness of its obvious attempts at being clever did entertain. It's something, right?

It's approaching Valentine's Day and a group of girlfriends are planning some big celebrations. They've been friends since middle school and despite some rocky relationships in the mix, including protagonists Shelley (Heigl) and Adam (Boreanaz), they plan to make the best of the holiday. The problem remains that a killer bearing a Cupid mask also plans to make the best of the holiday and punish these long time friends for a sin committed in their past.

Director Jaime Blanks (who previously helmed the revival slasher "Urban Legend" and later the stunning survival horror film "Storm Warning") does his best to salvage many, many moments in "Valentine" from being too run-of-the-mill and too silly. He throws in just enough visual flair to keep viewers interested and his highlights as a director come from his ability to actually build tension in the death scenes for characters we couldn't care less about. In fact, its these death sequences - as silly as some of them are...like a hot tub vs drill sequence that rarely makes sense - that certainly highlight "Valentine" in true slasher fashion. Some of them are surprisingly effective like the opening morgue death. Some of them, like the finale and its twist, are about as obvious in their pattern as the fact that these actresses were not hired for their acting abilities. Although Blanks does his best to keep them interesting, most of them are still very by the numbers for a slasher film.

Beyond the death sequences (which are the obvious reason anyone watches slashers like this), the film tends to drag on and on with its 'who is the killer' motifs and forced character development. The film opens on a flash back to what these friends did to an awkward boy at a Valentine's dance in sixth grade and it sets up the film to not be taken seriously. It's corny, poorly acted, and really does lower ones expectations of what this film is to be like. I laughed out loud multiple times at this set up. This guy must seriously be fucked up to hold a grudge since the sixth grade after being rejected for a few dances!

Even after that, the film rarely gets better. Our actresses are given plenty of awkward chemistry between them to have us looking at our watches and the plot progressions, with all of the red herrings about who our cupid killer is, can be gratingly forced. Occasionally the film goes for the fun factor, which helps, by making some of the characters blatantly cliche like Denise "I've always wanted to have Christmas in Turkey" Richards, but in the end it can't save the poorly developed script and poor acting.

It's obvious that "Valentine" was a last ditch effort to really cash in on the revival slashers of the 90s as it clings to its 'Valentine inspired cupid killer' concept with the vigor of a dying trend. It occasionally has moments of fun and silly slasher cliches, but overall comes off as just another watered down attempt at making horror something of a date film instead of the fear inducing flick it could be. It's a film mostly for those looking to kill some time with a by the numbers cash grab.

Want to see "Valentine?" Purchase at the link below or pick one of our other recommendations!