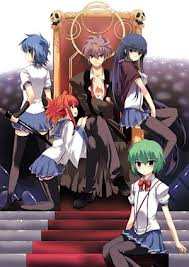 Every once awhile I stumble across something unexpectedly that turns out to be a pleasant surprise.

I would very much consider Demon King Daimao one such find.
With a mixture of action, drama, comedy, and yes, fan service, this series pretty much has it all. At least from this fanboy's perspective. This series is brought to us by Sentai Filmworks which I might add has put some top notch series' out over the years. This series is well cast with the main charcaters being voiced by such anime mainstays as Chris Patton, Greg Ayres, Luci Christian, Maggie Flecknoe, and Melissa Davis. With that said here are my thoughts on this series.


The storyline: The series is about a young man named Akuto Sai, who is to be a new student at the Constant Magik Academy. While in a destiny deciding room filled with other students and a cigar smoking bird (think Harry Potter talking hat that picked his room) it is determined that Akuto is to be the future Demon King. With that all hell breaks loose for him. You see Akuto was hoping to become a priest, being raised in an orphanage since birth he was a good catholic boy. So you can only imagine how unsettling it was for him to learn that his future was the complete opposite of his dream. 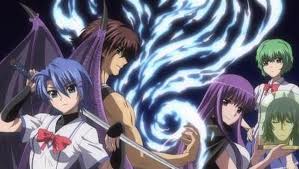 On his first day he met Junko Hattori, whose family is the protectors of the empire. They had started out to be fast friends until the prophecy was spoken and now Junko feels as though she must protect everyone from the Demon King. Of course, there are a few comedic instances where Akuto accidentally unclothes her which of course she thinks he did to humiliate her which only adds fuel to her fire for destroying him. Akuto finds himself surrounded by many different characters throughout the series, some who want him dead others want to have sex with him. So many distractions for him while all he is trying to do is live a normal life as a student.

The series: There are 12 episodes in this series and each one actually serves a purpose to the story.
Unlike a lot of series where they throw in filler episodes, I think this is a pretty unique series in that regard. The series is basically broken down into 3 different films with the first 3rd being academy life and just trying to adapt to all this Demon King talk. The 2nd is a comedy in which a lot of fan service and sexual jokes play in. I will admit I am not a huge fan of unnecessary fan service but for the most part it really worked well in this series. There were several scenes and dialogue between Akuto and his surveillance agent Korone that are just plain funny.

The final act is an all out action film. It has everything from flying suits of armor, dragons, magic weapons, to machine guns. Tons of great fight scenes. 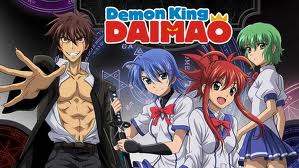 I also enjoyed the sound track, especially during the action scenes, it was very fast electro type music that really worked well within the series.

The artwork: Nothing new here really. The series looks great. The characters are very well done with some pretty cool backdrops. Great use of vibrant colors that seem to really pop with darker backgrounds.

Final thoughts: This was a surprise find for me. I had never heard of this series and was just checking through my Netflix and thought it looked cool. Sure enough it was a pleasant discovery. This series has plenty of nudity so be warned, lots of laughs, great action scenes and heavy religious references.

I strongly recommend this series if you like any of the above references. Be sure to comment back to me with your thoughts about this series. Check me out on Twitter as well @Pinlao. Thanks and until next time keep watching anime!!

Think you would like "Demon King Daimao"? Purchase it at the link below or check out other recommendations from John!
Posted by Unknown
Email ThisBlogThis!Share to TwitterShare to FacebookShare to Pinterest
Labels: Action / Adventure, Anime, Horror, Science Fiction