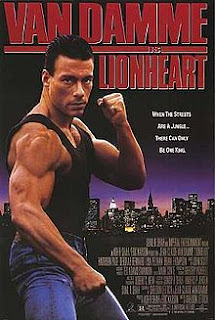 After a roundabout of successful low budget films in the late 80s, Jean-Claude Van Damme was ready to break out of the cult standings and into more mainstream work. Enter in 1990's "Lionheart." Where his previous films had him as some sort of godly fighter, the focus of this film gears towards a little more realistic and 'average joe' kind of mentality...if an average joe had some kick ass street fighting skills. Nonetheless, "Lionheart" grasps for a more dramatic and realistic tone and it does wonders to create a rather likeable film - even if it's very cheesy, suffers from a rather low budget, and has some amateurish execution.

When Lyon Gaultier (Van Damme) finds out that his brother was burned horrifically in Los Angeles, he decides he needs to help out his wayward brother and family by any means necessary. By any means necessary, I mean fleeing from his post in the French Foreign Legion stationed in Africa, jumping ship, and making it to America. Unfortunately, his geography isn't very good and he ends up in New York with no one to help him and no money. Luck will be with him though as he befriends a street wise homeless hype man Joshua (Page) who helps him earn some money by street fighting so he can make it to LA. But will the toll of his fierce fighting abilities get him into the wrong crowd or help him seek his lost family?

For a film essentially about a foreign street fighter, "Lionheart" has a lot of...well, heart. It really does focus in on Lyon's struggles against forces that want to desperately use him for those own cause. Some of the films more dramatic and serious moments, the time he spends with his brother's family for example, work quite well to really make the audience feel for his situation. Yes the film can be notoriously cheesy with some of its complications in his goals (including some Foreign Legion folk who are hunting him down that deliver some of the worst lines of dialogue in the film which says somethign when the dialogue is pretty bare bones and silly to begin with) and Jean-Claude gives a rather wooden performance, but in the end I would definitely give the film an 'A' for effort even if the execution is wobbly on its own feet with some awkward scripting.

As for the fighting, its hit or miss. The filmmakers and writers obviously wanted to throw in some unique and memorable sequences to try and push this film to A-list level action and most of it comes off as silly. Fighting a man in a kilt? An empty swimming pool for a street fight surrounded by people in high end clothing sipping champagne? It can very cheesy and for the most part the choreography is a bit slow for the actual fights as Lettich was mostly a screen writer before this and his work as a director is still pretty amateur here. Again I admire the fact that "Lionheart" goes for it and even when its a miss, the film charms itself out of the hole it digs.

For an early 90s romp into low budget action, "Lionheart" is fun and surprisingly charming with its dramatic bits. The relationship between Lyon and Joshua is quite intriguing and the familial tones work out. Jean-Claude is a rather wooden actor still and his performance lacks some of the luster he would gather later on, but its a fun film that tries very hard to do its best despite some of its odd plot twists and weird sexual undertones. It's a movie that I don't visit very often, but when I do its hard not to enjoy it on some levels.