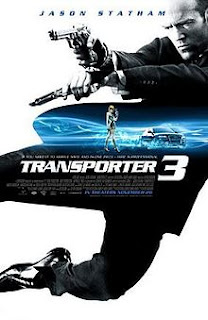 Upon revisiting Luc Besson's "Transporter" series I was rejuvenated with my love for both ridiculous modern action films featuring amazing fight sequences and Jason Statham. That was, of course, until I finally made it around to re-watching "Transporter 3." Although there is plenty to love about its continuation of ridiculous moments in writing and the innate charm of Jason Statham to keep the franchise going, this film is handedly inferior to both of its predecessors. It's not near as intense in its over the top fashions as part two, not is it as effective in its storytelling as part one. It's just mediocre overall and its quite the disappointment.

Frank Martin (Statham) is back in Europe doing what he does best: transporting illegal packages with no questions asked. When he sniffs out a rather sticky situation and passes on it only to find a friend dead and his own head in the guillotine, its life or death for him to deliver a young Ukrainian woman across Europe on a tight deadline. It's a larger conspiracy of political intrigue that Martin finds himself connected to and his only choice is to complete this delivery...or it just might be his last.

To be honest, the first two films were not great films and the ridiculousness of "Transporter 3"'s plot falls right in line with how the series is going. There is a fairly strong villain to hate here and the film has a few fun and clever twists up its sleeve to keep itself entertaining...like bombs attached to both Statham and his female companion that will explode if they move too far away from the car. These elements a lot a few outrageous sequences of Statham mini-biking to keep up with his stolen car and trying to survive when his car is sinking in a lake that might inspire some unintentional laughter but certainly do entertain first and foremost. Even Statham seems to be in full on charm mode with the character as he smarts off and beats the hell out of everyone who even remotely might be connected to those who stand in his way.

Yet, there are two things that very much crap a shit storm on my merry B-grade action parade.

1) Director Oliver Megaton. The guy has a slick music video style that promotes some modern twists and a visual eye for the outrageous. He also has no idea whatsoever how to handle action sequences without fucking them up beyond recognition. When you have a choreographer like Corey Yuen working on your film, with Luc Besson producing, and Jason Statham performing...this should have been a shoe in for awesome action of the decade. The inconsistent editing and epilepsy inducing zooms completely undermine any good fight choreography or stunt work that this film had going for it. You can't recognize anything that is going on and the editing is so quick and choppy in these sequences I felt like perhaps I would have been better off to just imagine it in my head with my eyes closed for more cohesive results. It's a damn disaster of action.

2) Actress Natalya Rudakova. Normally I wouldn't use one actor or actress as a reason to hate on a film, but Rudakova makes an exception. Her role as the package/love interest of Martin is abysmal. I use the term actress as lightly as possible. Reportedly, Luc Besson saw her on the street and asked her to come audition for the film despite not being an actress. It shows. And the writing doesn't help. She's whiny. Her character shifts moods at the drop of a pin. It's pulling teeth to watch her try and have chemistry with Statham on screen. It's all around a painful experience with her on screen both as an actress and in the severely poor character writing she is given.

Even though "Transporter 3" throws in a few new twists to keep it interesting, the fact remains that even for a B-action film its disappointing. It still has Statham going for it and its silly plot, but the action is butchered and the supporting cast (sans villain) are poorly executed and grating on the nerves. I hope that Besson has it in his heart to push ahead with a fourth film. I simply refuse to let the franchise end on this note.