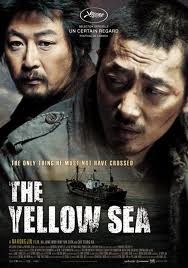 At this juncture in the world wide scheme of cinema, you put the word 'Korean' with the word 'thriller' and I'll be damned if you aren't going to strike gold. I'm not a fool and I understand that here in the US we are only going to see the best of the best coming across the oceans, but the consistent quality at which the Korean film market is knocking out thrillers is astonishing. This is why when I was requested to review "The Yellow Sea" I was a happy camper. I didn't really need a reason to see the film, but having one made it even better. And luckily, the end product was a delightfully intense experience. "The Yellow Sea" takes it's sweet time to build up its simple story and subtle characters...but the payoff was worth it.

Gu-nam (Ha Jung-woo) is in big trouble. He owes a lot of money to some loan sharks, he has a gambling addiction, his taxi business isn't cutting it, and his daughter has to live with grandma because of said problems. To top it all off, the reason for all of his debt was that he sent his wife to Korea to make some money to get their family out of poverty and now she has disappeared. As fate would have it, a local crime boss (Kim Yoon-seok) has given him an opportunity. He gets a free ticket to Korea with ten days to find his wife and all of his debt will be paid off...all he has to do is kill a man in Korea when he's there.

Not since the film "Protege" have I been this depressed after watching a film. It takes a lot for me to really feel a strong emotion after a film and I have to admit that "The Yellow Sea" made me hate existence a little more then I used to. Despite how the film tends to drag a bit in the first two-thirds of its play time with its slow burn build and character development, it did its job incredibly well by giving us hope for this man trapped in the harshness of life. To watch this practically mute character (he really has very little to say throughout the film) given this opportunity only to watch it crumble in his hands by circumstances out of his control is devastating. With the phenomenal acting performances from all of the players and the focus on a realistic drama unfolding in front of you...I was invested without ever realizing it.

Thusly, by the time the third act rolls around I was hooked. Then the filmmakers take it to the next level. Shit gets complicated and by complicated I mean violent. And boy does it go there. Although the pacing for the film can be almost too slow for its own good at times, when the chase begins it kicks into overdrive. Ruthless gangsters, corrupt organizations, and men beaten to death with a ham bone..."The Yellow Sea" takes the thriller aspect to horrific levels. Strong atmosphere and well placed and intense violence (with very realistic special effects) make the final portion of the film a nail biting experience. It feels like it never lets up and honestly speaking I didn't think the dock chase would ever end.

I wouldn't call "The Yellow Sea" a perfect film particularly when compared to the brilliance of films like "Oldboy" and "The Chaser", but its artistic touches are balanced very well with its genre film making styles. For every thoughtful moment of character growth or plot progression (including the progression of the lead characters thoughts about his missing wife), the film throws a brutal beat down into the mix and it makes for an entertaining and ultimately depressing experience. "The Yellow Sea" is an exhilarating and visceral ride that makes it the feel bad film of recent memory.