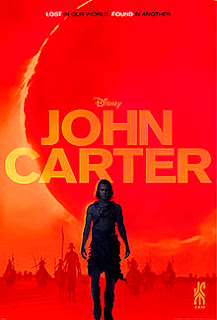 Have you ever been really, really sick with vomiting and a horrible sweaty fever? And then you go to sleep and you have some really fucked up dreams where things rarely make sense and outrageous things become monumentally awkward? Those fever dreams are exactly how I felt while watching "John Carter."  The scale of the film desperately wants to be epic, but its goofy execution hinders it from ever feeling as such and its bombardment of fantasy/science fiction/historical elements is splattered in ways that rarely combine to paint the portrait that this film wanted to be. It's a great concept for a film franchise that seems about as disconnected from reality as its plot is. It's a fever dream of the worst kind plastered in film format and one that I wish would have stayed in developmental hell.

John Carter (Kitsch) is a Civil War veteran looking to find his way in the world. Lost and without a purpose, he ends up with a device purely by accident that transports him onto the planet Barsoon (or as we know it Mars). There he finds himself in the middle of yet another civil war between two of the planet's feuding clans with all kinds of indigenous creatures of the planet and other perils that lie in his way. Can the lost solider find his way back to Earth or will he choose to stay and fight for the rights of a people he has no connection to?

Edgar Rice Burroughs' long awaited John Carter finally makes his way to the silver screen. It's an ambitious franchise to try and convert to film, but the fine folks at Disney try their hand at it with little in the way of success. Truly the only comparisons to how much this film fails to find its balance between the slew of different genres and elements it forces into its run time is that it's a cross between the original "Dune" and Disney's other franchise failure "Prince Of Persia." If the combination of those two films sounds atrocious...that's because "John Carter" is. It's simply a mess of a film and despite a few good things to laugh at unintentionally, it falls on its face repeatedly.

One thing I will say about the film is that the visuals are damn epic. Rarely do they make sense and often enough they come off as goofy (just take the weird dragonfly looking flying machines that fly on sunlight (?!?!?!) as a prime example of this), but its hard to deny the extensive amount of CGI isn't at times fairly cool. Perhaps this is because the director is Andrew Stanton who garnered his fame as a director of Pixar films like "Finding Nemo" and "Wall-E." He knows how to use CGI to some effective looking ways and here in "John Carter" its the only redeemable quality.

Once one tires of the copious amounts of CGI and visual spectacle of the film, then the rocky foundations come out to haunt. Kitsch is poorly cast in the lead (he just can't pull off the war torn widower if he was one in real life) and the script is about as cluster fucked as it can get. The film has to move at the speed of sound to fit in all the necessary plot points it needs to even try to be a fulfilling movie experience... and in its race to jam as much shit as possible into its excruciatingly long two hour run time it forgets to make any of it matter. Who cares if John Carter gets home or not? Who cares if this war creates a world of slavery? Who cares about the romantic plot that is integral to this franchise? I certainly didn't and "John Carter" forces it down our throats in such a hasty fashion that we gag on it and hate it for not tasting like it should. For a film to start off a franchise its far too complicated and far too poorly structured to make it work. Even its "trick" ending seems to be both cliche and out of the blue at the same time.

Then of course, the film has to battle itself in what it wants to be. Is it a family film? It tries with some goofy comic relief (and a horribly irritating CGI dog monster that just won't go away) and its simplified characters, but unfortunately for the story to work it needs to go into some more adult themes of slavery, civil war, and the death of the lead character's family. The balance is thrown off. The film either needed to embrace its darker streaks and focus on characters instead of ridiculous action set pieces of a CGI bounding John Carter or it needed to simplify itself even more and become the cartoon it desperately wanted to be. It couldn't do both.

I do have to admit that the unintentional hilarity of its poorly executed script and over the top forced action will make this a cult film someday just like "Dune" has seen itself become. It's one of those films that once we all get over just how bad it is with its unfocused attempts at being both a family friendly actioner and a serious themed franchise kicker, then we will learn to love it for being so bad. I foresee that in the future for this film and am looking forward to bitching about it in ten years time.